UPDATE: After digging around in the Central Library archives, it appears that the first Bicycle Sunday was actually held in April 1968. That would make 2015 the 47th anniversary, not the 50th. I’m working to confirm and clarify this as well as dig up more details on the history of the event. Stay tuned for more coverage. I’ve already found some pretty cool artifacts. 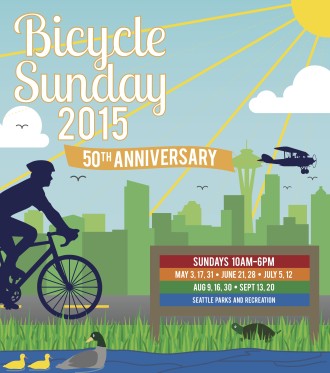 For a full half century, Seattle (and sometimes neighboring cities) have been opening up stretches of scenic streets to people biking, walking or otherwise getting around under their own power by closing them to motor vehicles on Sundays during the summer.

Bicycle Sundays is a family magnet, attracting people of all ages and abilities to get out on the streets and enjoy the city without the fear of mixing with cars. Lake Washington Boulevard in south Seattle has been the epicenter of this open streets effort, which has been credited with — at least in part — inspiring open streets events all across the world. First held in 1965, it’s one of Seattle’s greatest bicycle culture contributions.

“Activities like this bring neighborhoods together and keep Seattle healthy and vibrant,” said Mayor Ed Murray in the 2015 Bicycle Sundays brochure.

The city is prepping efforts to dramatically up its open streets game this year. The Summer Streets program has a funding boost to expand into a couple Summer Parkways open streets loops. Because Bicycle Sunday is awesome, but you don’t have to go all the way to the shore of Lake Washington to enjoy biking. You can do that in your own neighborhood, or at least that’s the goal of safe streets advocates.

City staff have been working to get the ball rolling on these events, but Nicole Freedman, who was hired to take charge of the Summer Parkways program, just started work recently. Stay tuned for more details in May.

As with recent years, there will be 12 Bicycle Sundays in 2015 May through September. The route from Mt Baker Beach to Seward Park will be closed to motor vehicles from 10 a.m. to 6 p.m. each event day:

Here’s a map of the route: 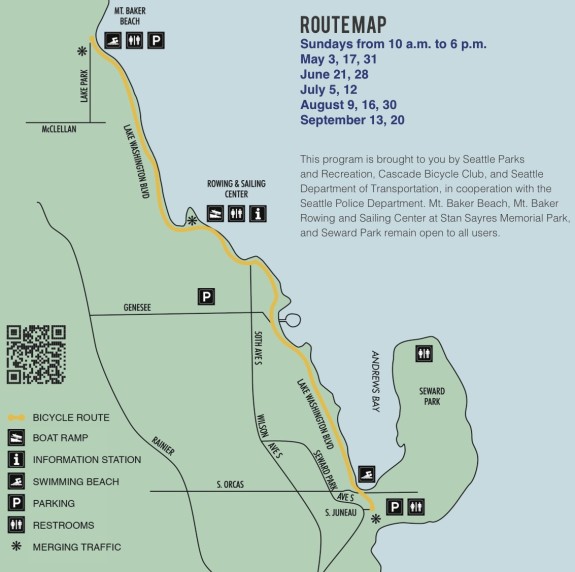 This entry was posted in news and tagged bicycle sundays, open streets. Bookmark the permalink.

7 Responses to For 50th year, Bicycle Sundays kicks off on Lake Washington Blvd this weekend – UPDATED