Watch: Best Side Cycling tours the new 15th Ave NE bike lanes + What can we learn from its shortcomings?

The new and improved 15th Avenue NE bike lanes opened last month, and much of the project is excellent. But the opening celebrations have been a bit dampened due to the city’s decision to ignore people’s requests to help them cross the biggest barrier to biking on this route: Lake City Way.

I have been a bit slow to write about this project because the city has put safe streets advocates in a bit of an awkward bind here. On one hand, they did build nearly one mile of new protected bike lanes. As important as it is to watchdog transportation projects, it is also important to celebrate wins. This is a mile of bike lane that is now part of our city, and that’s great. People will be able to travel by bike more comfortably and, hopefully, more safely. The bike lanes also significantly reduced the crossing distance for people walking across this street, which is far too wide for the relatively low amount of car traffic it carries. Bike lanes are not just about biking, they are part of a complete street that is safer for all users.

It is worth celebrating every time the city makes our streets significantly safer than they were before, and most of this project does so. I feel like I need stress that there’s a full stop after this sentence, even though I know you can sense the word “but” coming soon. This street is safer, and if this project works as well as we all hope then as many as 10 people will be spared from serious traffic injuries or death every year from now on. That’s a huge and very real improvement.

But (there’s that word) the project has some major shortcomings that undercut the effectiveness of the rest of the improvements, and it’s difficult to want to heap too much praise on the city because of them. However, the problems happened during the previous administration, and I hope that SDOT and Mayor Bruce Harrell can learn from these issues and avoid them in the future.

The highest-level takeaway is that SDOT and the mayor need to listen to advocates, who were genuinely engaged in this project’s design process. Mayor Jenny Durkan chose to completely shut out and ignore community members who volunteered their time and energy to engage with this project and suggest improvements. This was a major problem with Mayor Durkan’s leadership in general, and it’s consequences show up once again in the way this project turned out.

The biggest and most obvious problem with the street’s design is that all safety improvements end one block before reaching Lake City Way, one of the most dangerous streets in Seattle. The paving project continues all the way to the busy street, but the bike lanes and their related street safety benefits end at NE 80th Street. As the new roadway approaches Lake City Way, it balloons out from two general traffic lanes to four despite the fact that traffic volumes actually drop from 10,000 vehicles per day to 8,000 according to the city’s 2020 Traffic Report (based on pre-pandemic 2019 data). Even 10,000 vehicles per day is not much at all for an arterial street, and 8,000 will easily fit in two lanes. As the new lanes are added, all safety elements disappear. It is an enormous missed opportunity to keep people safe.

But to make matters worse, people made it very clear to the project team during the design phase that this was not good enough. Two years ago, when there was definitely enough time to make changes, I summarized what I had been hearing:

This means people biking north will lose all protection from traffic at the exact moment they need it most: The business district and the very busy Lake City Way crossing. The decision to end the bike lane a block and a half early also severely limits the benefit to all Lake City residents, who will still need to bike either in mixed traffic across a state highway or on sidewalks through the businesses district, neither of which are appealing options. This is a huge missed opportunity that severely undercuts the rest of the project. 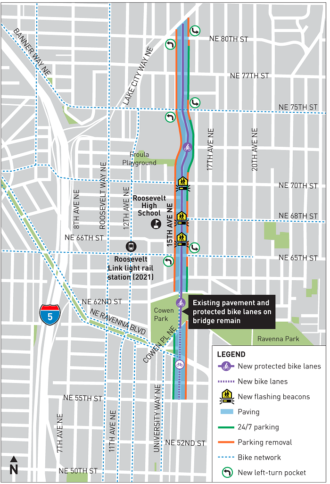 The project map showing the bike lane touching Lake City Way, which is not true.

But those concerns were disregarded completely, and no changes were made to the design. They did not even bother to update the project map, which still misleadingly shows the protected bike lane extending all the way to Lake City Way. The requests were so reasonable, and had the city listened they could have greatly improved the number of residents who could now benefit from the investment. Instead, people north of Lake City Way remain just as cut off from the bike network as they were before, and that’s a shame.

Protection for the bike lanes also drops at major intersections. NE 65th Street is a particularly frustrating missed opportunity because the city built protected bike lanes on that street a few years ago, which connect to Roosevelt High School, Roosevelt Station and Ravenna Boulevard. This was an excellent location to build and test a protected intersection. Instead, people lose their protection, and there is very little help for people turning left.

I believe in a Seattle that is always looking for ways to innovate and improve, and I think that’s the kind of vision that inspires residents to put their faith in our institutions like SDOT. This project is not an example of inspiring innovation.

Another issue is the decision to use temporary materials for the bike lanes and crosswalks even when rebuilding the rest of the road. The paint-and-post parking-protected bike lane design continues to be effective, especially for quick, low-budget bike lane improvements. When adding a bike lane to a street that is not being repaved, the city can save a lot of money by using plastic posts and paint to redesign the roadway instead of more expensive and permanent materials like concrete curbs. And at least in theory, saving money on materials allows the department to create more miles of bike lanes, which is a good thing. These paint-and-post lanes can then be upgraded whenever that street is repaved, a sensible financial management strategy because rebuilding the street is the most cost-effective time to build in more sturdy and permanent bike lane and crosswalk features.

In the below screenshot from Best Side Cycling’s video, you can see a large painted hashed out area before the car parking starts. This area is supposed to both protect the bike lane and also act as protection for people using the crosswalk. But there’s nothing actually stopping someone from driving straight through it. Why did the city go with a temporary safety feature instead of a permanent one? Do we anticipate a time in the future when we will not want this crosswalk to be safe? 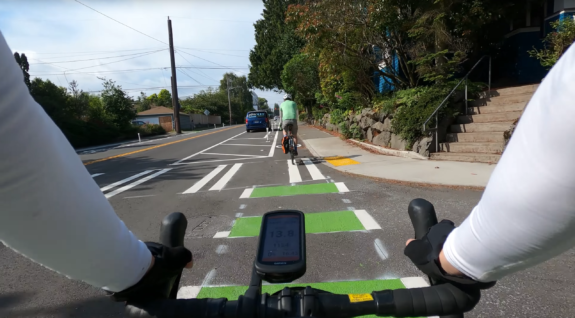 Screenshot from the Best Side Cycling video.

The obvious answer will be, “Budget!” But that answer reveals the ongoing problem within SDOT’s paving program. Treating the clean sheet of asphalt as the primary project goal and the safety elements as nice-to-haves fails to make safety the top priority as the department consistently claims it to be. Safety elements are part of SDOT’s core mission, and if there’s not enough money for the safety elements, then there’s not enough money for the paving project. Until the department and political leaders shift their thinking and goal-setting around this, we will continue to miss opportunities to make our streets safer. Everyone needs to remember that the true cost of failing to make our streets safe is too enormous to count.

The good news is that SDOT is getting a new Director and Mayor Harrell is leading a new transportation planning effort for the city. With clear leadership, SDOT is fully capable of doing better.

Founder and Editor of Seattle Bike Blog.
View all posts by Tom Fucoloro →
This entry was posted in news and tagged 15th Ave NE, best side cycling, sdot. Bookmark the permalink.

6 Responses to Watch: Best Side Cycling tours the new 15th Ave NE bike lanes + What can we learn from its shortcomings?