For a four-year period, the short stretch of NE 65th Street between NE Ravenna Blvd and 39th Ave NE killed one person and seriously injured at least one other person every year. But a hard-fought safety project installed in spring 2019 has cut collisions by more than half and has so far eliminated deaths and serious injuries, according to a new SDOT report (PDF).

As with nearly all of SDOT’s Vision Zero street redesigns, the project is a huge success. It once again demonstrates the department’s ability to save lives and improve mobility when it prioritizes safety on our streets.

There is at least one person somewhere who is sipping coffee, Zoom chatting with a loved one or otherwise living life at this moment who would be dead if not for these safety changes. Is it your friend? Your mother? You? We will never know who that person is, but we do know that had the city chosen not to take action and make changes to this street, one person would die every year. And that person would most likely have been walking or riding a bike.

And these benefits come even though the city compromised fairly heavily on many of the details. For example, intersections do not have separated signal phases for people on bikes and bike lanes share space with bus stops in several locations. And worst of all, the bike lanes stop at 20th Ave NE, providing no dedicated biking space between 20th and 39th. But even with these compromises and half measures, the results are impressive.

And the problems that led to traffic danger on this street were not at all unique to NE 65th Street. They are problems repeated on streets all over the city and the region. Too much space for cars leads to speeding and no space for people biking or crossing the street leaves them vulnerable. 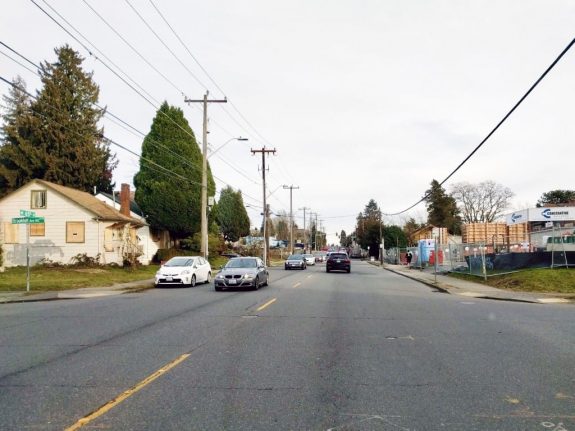 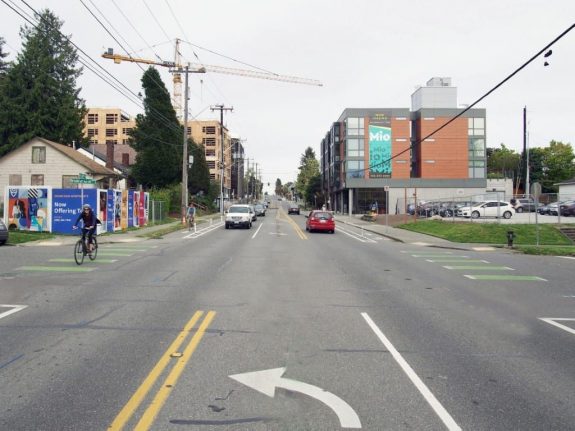 There’s a very good chance that the “before” photo looks very familiar even if you’ve never been to NE 65th Street before. That’s just how streets were designed for the better part of a century, giving all the space to general traffic. This street design has proven to be a horrifically deadly mistake. Someone walking or biking across the street is essentially exposed to car traffic danger from one curb all the way to the other. The longer someone is in the path of moving cars, the more likely someone else will hit them with a car. This is not rocket science. It’s very simple. By building bike lanes and a center turn lane, someone crossing the street is only exposed to through-traffic for about half the distance as before.

We know that wide lanes encourage people driving to speed. But worse, the very wide lanes on NE 65th Street allowed people who wanted to speed to drive around people who were driving safe speeds, which introduced many dangerous passing scenarios. So SDOT better defined the travel lanes and made them skinnier, and speeding declined. 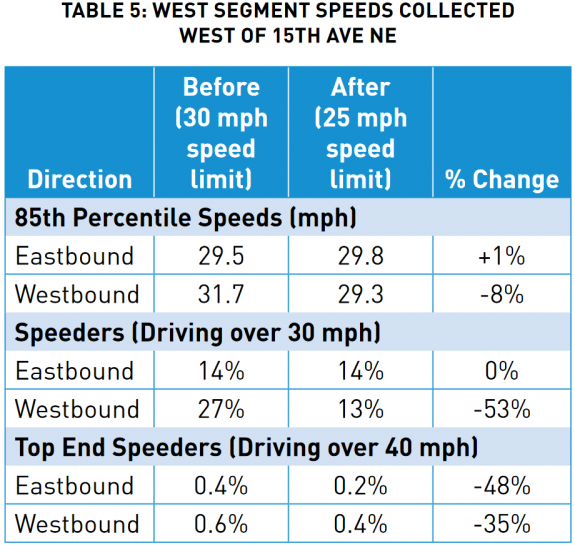 So not only are there fewer than half as many collisions now, but the collisions that do happen occur at slower speeds. This safety double-whammy is why these Vision Zero projects are so consistently effective and repeatable. Stone Way, Nickerson, NE 125th, Rainier Ave, and on and on.

It’s beyond time to reframe how we think about these Vision Zero projects. The question isn’t “Should we make this street safer?” The question is “How can we justify allowing people to be injured or killed on this street when the we know how to fix it?” The onus shouldn’t be on safe streets advocates to organize protests to get safety fixes. The onus should be on safety project opponents to make the case that people dying and being seriously injured is a justifiable cost for maintaining the status quo.

These are the same results that would have happened on 35th Ave NE had Mayor Jenny Durkan not cancelled that project’s safety upgrades at the last minute. Like with 35th, there was enormous resistance to the safety project on 65th. I attended a brutal 2013 public meeting in a packed gym just blocks away from this now-safer street in which people yelled at then-Mayor Mike McGinn for an hour because the under-development Bike Master Plan called for these bike lanes. It was very well-organized and full of misinformation and fear-mongering about all the ways the bike lanes would destroy the neighborhood.

“A cycle track is not a fuzzy teddy bear, it’s a dream killer,” said the opening speaker to applause. The bike lane was going to close all the businesses, prevent friends and family from visiting each other and might actually kill people because ambulances wouldn’t be able to park with the bike lane, people claimed. Of course none of this was true just as it wouldn’t have been true for 35th Ave NE had the Mayor Durkan backed SDOT’s plan there. Neighbors calling on the city to #Fix65th deserve a ton of credit for staying organized and dedicated to making this project happen even in the face of tough opposition. I really hope people who attended that 2013 meeting to oppose bike lanes get to see these results and think about how they can avoid being mislead into fighting against safety projects in the future.

Of course, the project is far from perfect. The design includes several compromises that safe streets advocates fought against. And there were still three reported collisions involving people biking after the project was completed, though luckily none were serious. All of them were at intersections without a protected intersection design such as a dedicated bike signal phase. Two were at 12th Ave NE and one was at 15th Ave NE. The study does not say how these collisions occurred, but hopefully SDOT is prepared to make spot fixes as needed to keep everyone safe.

There was also a mid-block collision involving someone biking between 24th and 25th Avenues NE where the city chose not to build bike lanes. 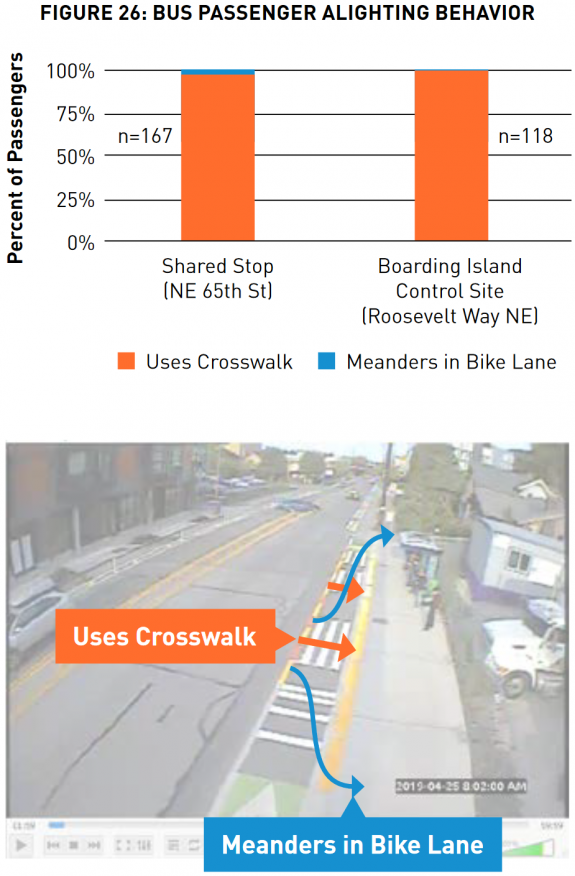 The project is also serving as something of a trial for a combined bike lane and bus stop design concept. This project created four of these “shared stops,” which are a little unusual because people entering and exiting buses do so in the bike lane. People biking are supposed to stop and wait while buses are loading, and people waiting for buses are supposed to leave the bike lane open when waiting. SDOT and Metro are monitoring how the lanes are working, and so far there have not been any serious issues.

“The new shared transit stop design operated as intended with no reported operational or safety issues,” according to the report. “This shows that the design can be successful at locations with lower volumes of bike traffic and moderate levels of passenger activity. It will be important to continue to monitor the operation of these designs when the North Link Roosevelt Light Rail Station opens and bike and passenger volumes increase.”

It’s not clear how well this design will work on a busier street, but the results are promising. I had my doubts about this design, and I’m glad that those fears so far seem to be unfounded.