Seattle has no bike share now, Lime says it will relaunch bikes at some point 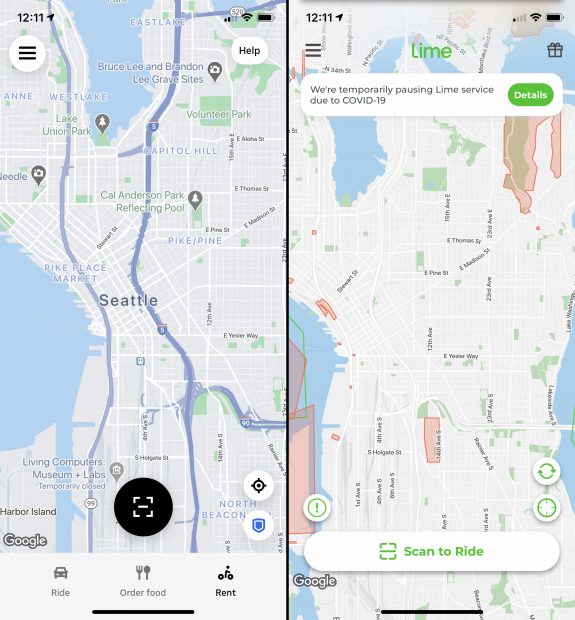 Neither the Uber nor Lime apps show bikes available.

For the first time since July 2017, no bike share bikes are available in Seattle.

As a consequence of the major investment deal yesterday between Uber and Lime, JUMP and its red bikes now belong to Lime. Though users could unlock the bright red bikes using the Uber app yesterday, today they disappeared. The JUMP app has also been discontinued, and the bikes do not appear on Lime’s app.

So this is a rather depressing and sudden end to Seattle’s free-wheeling, wild and twisting adventure as a hub of private dockless bike share experimentation over the past three years. Companies have ballooned in size and folded. Others pivoted to scooters and left town. And all along, company leaders have played an aggressive growth and acquisition game that has seen them gain huge amounts of venture capital investment at times. But it seems that investor dreams of finding a bike share “unicorn” are long over. Lime, which had been valued around $2.4 billion in early 2019 is now reportedly valued around $500 million.

Lime already pulled its e-bikes from Seattle streets in December, and the company has been essentially shuttered worldwide during the COVID-19 outbreak. Jonathan Hopkins at Lime told the Seattle Times that the bikes would be removed temporarily, but would return at an unknown future date. But given the state of the company and its clear focus on scooters instead of bikes, it’s far from certain the bikes will return.

The sudden loss of bike share is pretty devastating. People in Seattle took 2.2 million bike share rides in 2019. That’s more trips than both Seattle Streetcar lines combined, but at no cost to the city budget. And that entire mode of transportation is just gone now.

JUMP had even been providing free rides to essential workers. With people trying to avoid transit and the cost of owning and operating a car so high, bike share was a good option for a lot of people as a socially-distant way to get around. Bring some disinfectant wipes to clean the parts of the bike you’re going to touch, and you’re good to go.

Whether Lime brings bikes back or not, it’s time to talk about what the next phase of bike share looks like in Seattle. We’ve learned an enormous amount about the potential and challenges of bike share in our city in the past few years. We have seen bike share lead to huge increases in everyday cycling. It’s hard to think of another sustainable transportation program that has created such a swift, low-cost and effective shift in how people move around our city. Losing bike share would be a big step backwards for our city.

14 Responses to Seattle has no bike share now, Lime says it will relaunch bikes at some point