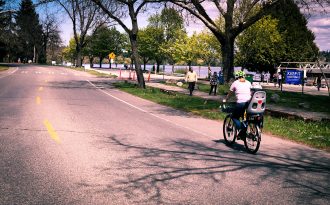 This was not technically a Stay Healthy Street. This stretch of Green Lake Way was closed to cars last weekend ahead of some construction work, and people found that it became a great place to walk and bike away from the busy Green Lake path.

Seattle has added six more miles of what the city is calling “Stay Healthy Streets,” car-light streets where through-traffic is banned and people are allowed to walk in the street 24/7. They are part of an effort to create more space so people can stay socially distant from others while still getting outside.

People are still allowed to drive to their homes. Deliveries and services are also allowed.

SDOT tested the concept in the Central District and High Point starting last weekend, and the CD route will be significantly expanded Friday. They are also adding Greenwood, Beacon Hill and Rainier Beach routes Friday, bringing the total number mileage to nine miles.

Notably, the city is making efforts to get around barriers like busy stretches by converting some on-street parking spaces to pathways so a few of the routes can be longer. For example, the block of 1st Ave NW next to Fred Meyer in Greenwood will have a pathway on the west side of the street. This is the only busy block, since people use it to access the giant parking lot, so extra protection is needed there to make the route work: 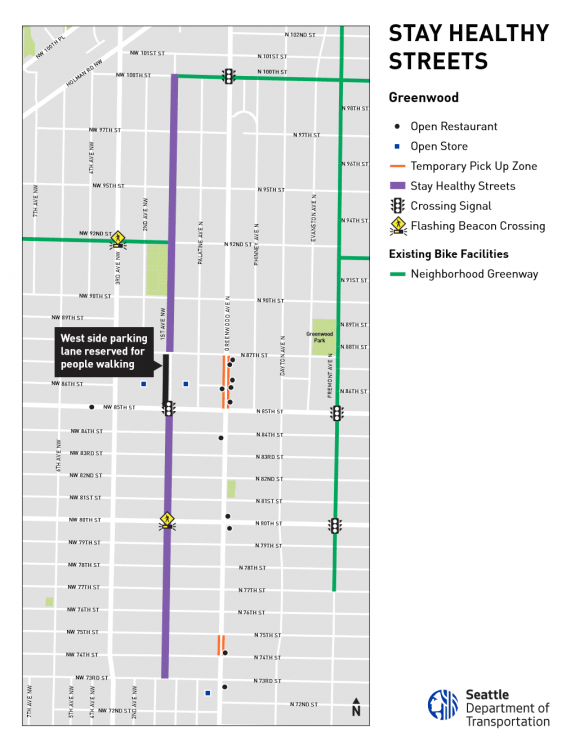 They are doing something similar on S Kenyon Street in Rainier Beach. S Kenyon isn’t the busiest street, but it might be a bit too busy to comfortably allow people to walk in the street without some extra separation from cars. 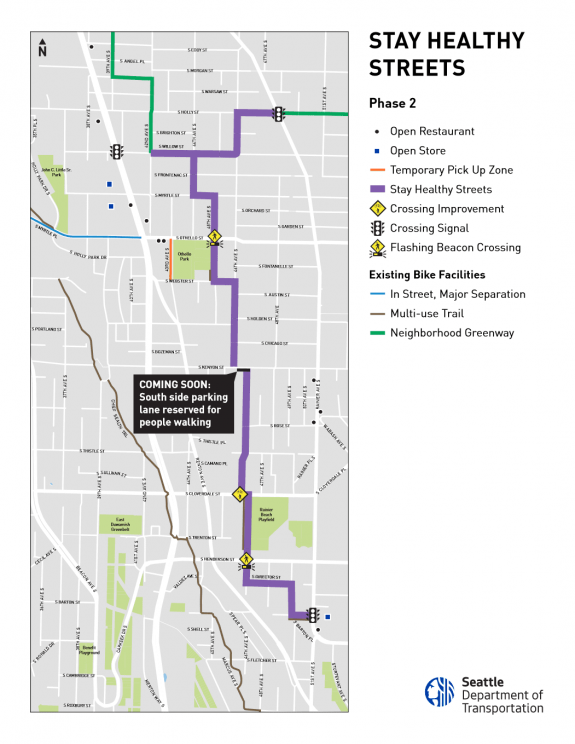 The Beacon Hill route is the existing neighborhood greenway between the Mountains to Sound Trail and Jefferson Park. This is a great route already, and an obvious choice for this program. As we discussed in our conversation with Gordon Padelford and Clara Cantor of Seattle Neighborhood Greenways recently, it makes sense for the city to target neighborhood greenway routes where there is already buy-in from residents that these should be low-traffic streets promoting biking and walking. This program just takes the concept to the next step. 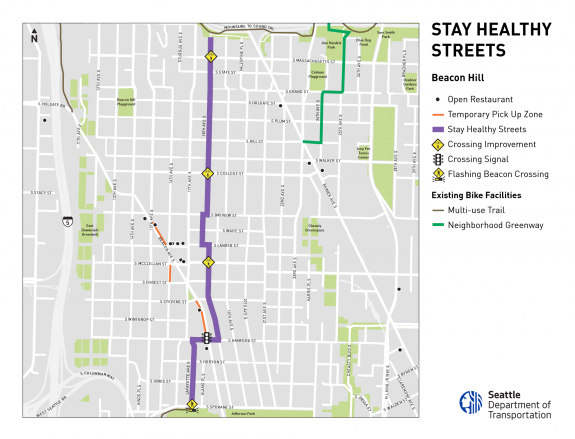 The Central District route now connects to Columbia Street, which in turn connects to Seattle University campus and the Madrona neighborhood. 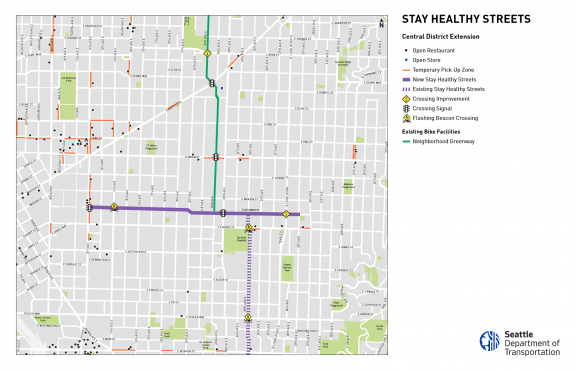 And since the existing Stay Healthy Street on 25th Ave S essentially connects to the Mountains to Sound Trail, you can now travel from Seattle University to Jefferson Park entirely on Stay Healthy Streets and trails. And if you’re biking, you can even cut through Seattle University up to the Broadway Bikeway and take that to Cal Anderson Park or take the Pike Street protected bike lanes all the way downtown, connecting to 2nd Ave, which connects to Seattle Center and… well, you get the idea.

There are a lot of options if you are trying to get out and stretch your legs, but these streets also have the potential to make getting around easier for people making essential trips or working essential jobs.

It’s hard to say what success looks like for this program. You want people to use them, of course, but you also don’t want them to get crowded. The initial routes seemed to be meeting these goals, though it’s kind of hard to measure. So long as people aren’t crowding on them, I’d say they are being successful. I mean, it’s not like they are hurting anything or costing much money. They are not actively staffed (I’m now imagining them putting up “No Lifeguard On Duty” signs).

Seattle Neighborhood Greenways is still collecting ideas for car-free or car-light streets and other improvements that could help people safely get out and get around while staying socially distant. So let them know you idea using this online form.

You can also help SDOT track how they are working and make sure signs remain in place. Details from SDOT:

We’re also seeking volunteers to confirm road closure signs remain in place, to conduct pedestrian and bicycling counts, take photos and share vignettes. Those interested in volunteering can email [email protected]. The counts will be used to monitor the success of Stay Healthy Streets, along with resident feedback, and any traffic impacts where vehicles are detoured.