With the fate of events uncertain, Cascade cuts half its staff and appeals for donations 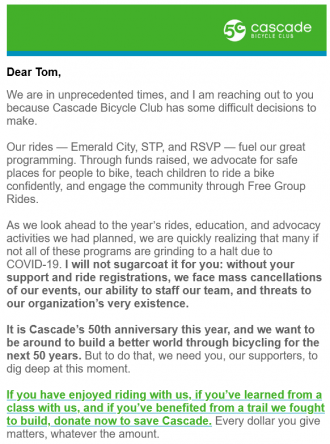 Cascade Bicycle Club moved Friday to furlough half its staff in what leaders describe as an effort to save the club, which is marking its 50-year anniversary this year.

“We want to make sure it’s around for another 50 years,” said Executive Director Richard Smith. “It became clear that we had to plan for the worst but hope for the best.” And the worst case for Cascade would be a total cancellation of all major events in 2020.

Nearly two-thirds of Cascade’s $5 million annual budget comes from the organization’s series of storied events like STP and the Emerald City Ride, and now some or all of those events are at risk of cancellation due to the COVID-19 pandemic.

The club already postponed the Bike Swap and moved its Bike Everywhere Breakfast from May to June. The breakfast kicks off Bike Month and is a major fundraiser. Bike Month, of course, is also packed with smaller events now in question. But as the pandemic plays out, it seems more and more likely that social distancing will be required for longer than initially thought. So even events that have been rescheduled might not be possible.

But the real doomsday scenario for Cascade is if they cannot hold their major marquee events. The Emerald City Ride has been postponed to a yet-to-be-determined date (possibly in the fall). But the elephant in the room is the annual Seattle-to-Portland ride, which is a massive two-day state-spanning organizing effort and major moneymaker for Cascade and its sister organization Washington Bikes.

“Something like the STP is very hard to reorganize or move to a different date,” said Smith.

They basically need to decide one-month before each event whether it is on or off, so you will have to stay tuned for news about each event. And since the news and public health guidance keeps changing so rapidly, they are going to wait and assess the situation for each event.

But the Board of Directors has decided to take drastic action to cut back on the organization’s costs to prepare for the worst case scenario. And that means cutting half of their staff from an organization that had 32 full-time equivalent staff before they announced the furloughs.

“Our Board President [Tamara Schmautz] actually works for UW Virology,” said Smith. “With her advice, our Board directed me and the staff to plan for the worst, and that means having absolutely no events through the summer.”

Discussions like this are likely happening all over the world right now.

“I don’t think we are alone in the pain we are going through,” said Policy Director Vicky Clarke. And she’s right. Businesses and non-profits of all kinds have been decimated by the drastic efforts needed to prevent this outbreak from overwhelming our healthcare system. “We need our community to step up for us so we can be there for them,” she said.

The organization sent out a fundraising appeal Sunday asking for financial help.

Cascade and Washington Bikes have very few peers in the bike advocacy world. Hosting major events to fund bike advocacy has allowed the organization to become much larger than nearly every other regional bike advocacy organization in the nation in terms of budget and employee count. But they weren’t prepared to operate in a world where people can’t get together.

“We could never have a contingency for this,” said Smith.

Staff members were informed Friday about the furloughs, and Smith said their intention is to work to hire people back.

“Job number 1 for those of us who remain is to get our colleagues back and working,” he said. And those who got cut are joining millions across the country who must now navigate this very uncertain time without the relative security of employment.

In the meantime, they are trying to figure out ways to carry on or modify their work so it can be done safely.

“We can’t bring people together, but what does that mean for our advocacy?”said Clarke. They are exploring ideas, such as changing how they train advocates. As of press time, they are hosting their Advocacy Leadership Institute online for the first time. And the process of hosting it virtually has led them to think about how the program could be expanded.

“If we’re doing ALI in Seattle, what’s stopping us from having people in Spokane or Walla Walla on the call too?”

But those bright spots will almost certainly be overshadowed by what is missing from their work.

“The core of our business is bringing people together, and now we can’t do that,” said Clarke.

6 Responses to With the fate of events uncertain, Cascade cuts half its staff and appeals for donations