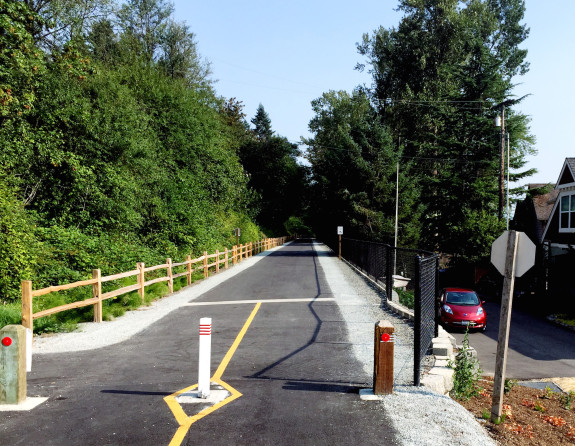 The North Segment of the E Lake Sammamish Trail was completed in 2015. 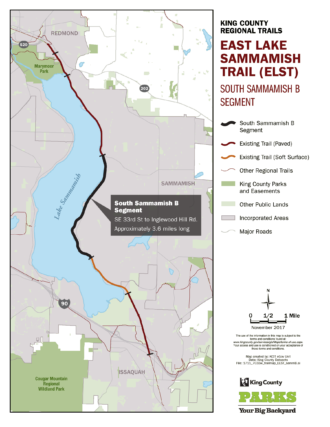 The County is preparing to construct the final section of the trail.

Last week, King County took action to reclaim public land in one of the wealthiest areas in the state: Sammamish. The County fought and won a very difficult legal battle to determine that, yes, the public does own the entire rail corridor along the east side of Lake Sammamish. And as it prepared to construct the final section of the East Lake Sammamish Trail, the County is trying to get lakeside homeowners to clear any structures or personal property from County land.

This is a persistent problem across Seattle and King County, especially near very valuable shorelines and parks. Sometimes, adjacent homeowners try to reserve public land for their own private use, and it’s often hard for the public to know when their land is being illegally seized. There may even be times when homeowners thought that public land belonged to them, and are dismayed to learn the truth.

But it’s hard for me to imagine fighting to keep public land for myself. Then, after losing a long and difficult court battle, to go to the Seattle Times and try to pretend that letters from the County telling me to move my stuff off public land within 9 months were “heavy handed.” The county is giving them until the end of September, which is frankly far too generous. This land is not just theirs, it belongs to all of us. How selfish can they be?

When people who have nowhere else to live set up a tent on public land, Seattle policy gives them 72 hours of warning time to remove their belongings before bringing in crews to throw everything they own in the garbage. Often, the city doesn’t even give that much time. These sweeps are ineffective and cruel. But isn’t it strange that people with million-dollar homes to live in get 9 months to move their decorative landscaping or whatever, but people who have no homes get 72 hours (at best) to move their whole lives? The disparity in how people are treated in our county based solely on how much money they have is galling.

My willingness to have sympathy for Sammamish property owners who have to move their things off public land ended when a group of them tried to blow up “rails to trails” nationally by challenging it at the U.S. Supreme Court. The Court decided not to hear their appeal, luckily. But wow. Rail-trails have done so many wonderful things for so many communities big and small across our nation. To attempt to undercut the entire concept just so you can keep your damn cabana on King County land, that’s downright evil.

The County also proactively filed legal action against eight parties regarding shoreline access that should belong to the public but currently has private docks and other structures on it. This is some of the most valuable land in the county.

I’m very glad King County is taking this action on behalf of all of us. Some of these homeowners need to be put in their place. They own homes worth millions in many cases, and they still feel like they deserve to have private use of the public’s land, too. Nope.

When the East Lake Sammamish Trail is finally complete it’s going to be great. It’s not just about connecting Redmond to Issaquah, it’s also about providing everyone access to a very beautiful part of our county. Most of construction on the final section is scheduled for 2021, so we shouldn’t have to wait too much longer to experience it. I mean, people have been wanting to build this trail for a half century, and the county acquired the rail right-of-way in 1998, so this is a really long time coming.

More details on the legal actions from King County:

As it prepares for construction in 2021 on the last undeveloped portion of the East Lake Sammamish Trail, King County is notifying trailside property owners this week to remove personal property from the construction zone of the publicly-owned trail corridor by the end of September 2020.

The early notice provides property owners alongside this 3.6-mile portion of the trail with ample time to make arrangements for removing structures, landscaping, and other encroachments.

Also this week, by taking legal action against eight property owners within the trail corridor, including six lake dock owners, the county is asking the federal court to affirm the public’s ownership rights to the shoreland portions of the railroad easement that the county purchased in 1998.

“We are taking steps now to make sure we can open up the long-awaited final segment of this regional public trail as soon as possible,” said Christie True, Director of the King County Department of Natural Resources and Parks. “We have utmost confidence in the public’s ownership of this property, but rather than await more legal challenges that serve only to delay the project, we are proactively seeking final affirmation in federal court.”

Some trailside property owners along this portion of the interim East Lake Sammamish Trail have enjoyed exclusive use of publicly-owned property for years, and in some cases decades, by building unpermitted landscaping, fencing, parking areas and stairs – even private sport courts and boat docks. These private unpermitted uses are illegal.

In 2016, a federal judge ruled that King County possesses all property rights in the trail corridor to build, operate, and maintain a trail.  This ruling was affirmed by the Ninth Circuit Court of Appeals in 2018. In 2017, as part of the trail permitting process, property owners with encroachments into the public trail corridor were informed that they were on public property without permission.

The public’s ownership of the corridor has withstood multiple legal challenges over the years, however the ownership question came up again when a homeowner challenged King County’s ownership of shorelands through a state land use appeal. The county is seeking reaffirmation of public shorelands ownership so these questions do not stall trail construction.

As for encroachments in the construction zone, any structures remaining after the September deadline will be removed by King County or a contractor at owner expense. King County Parks will work with the approximately 150 adjacent property owners to ensure their private property is removed from public land.

King County purchased the former Burlington Northern Santa Fe railroad corridor in 1998 for the purpose of building a regional trail to connect the growing cities of Issaquah, Sammamish, and Redmond. The county completed an interim soft surface trail in 2006 and has been working on building a paved trail with additional amenities since then.

The final segment of interim East Lake Sammamish Trail to be developed from an interim soft-surface trail to a paved master planned trail stretches from Southeast 33rd Street to Inglewood Hill Road.

This portion of the trail will be closed for construction beginning spring 2021 until completion, which is expected in 2023 – closing the last remaining gap in the 44-mile-long “Locks to Lakes Corridor” of paved regional trails. When completed, residents will be able to travel from Ballard to the Cascade foothills all in one continuous, non-road, paved path.