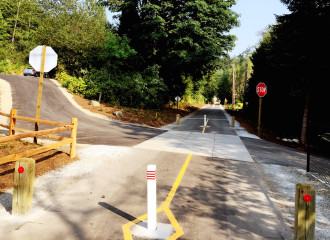 Completed in 2013, this section of the trail includes stop signs facing the street rather than the trail. This is best practices and works well. This is why the City of Sammamish is fighting?

The City of Sammamish and King County are fighting in court over four proposed stop signs on two very low-traffic streets serving a handful of wealthy lakefront homes, and that fight is further delaying construction on the E Lake Sammamish Trail.

The good news is that the County is winning so far. But the final outcome is still uncertain. From Cascade Bicycle Club’s Vicky Clarke:

Early this summer, the city of Sammamish ordered King County to stop construction of the East Lake Sammamish Trail (ELST), just as King County crews neared completion of the penultimate segment of the 11-mile trail. At issue was placement of stop signs in two locations on the trail. To resolve the dispute and complete the trail, King County asked the Federal District Court to step in and make a decision on the case. That decision came on August 8th when the Federal District Court ruled in favor of King County, meaning that construction can resume and the region is one step closer to realizing its vision of the Locks to Lakes corridorfor all to enjoy.

The rail trail connecting Issaquah to Redmond is already complete on the north and south ends, and the central connection through the City of Sammamish is funded and ready for construction. But Sammamish has decided to fight King County over a couple measly stop signs.

What’s particularly frustrating about this lawsuit is that, as we pointed out in 2015 when the section to Redmond opened, the already-completed sections of the trail demonstrate in real life how the County’s design works. And it’s a vast improvement over many other trail crossings in Seattle and King County where stop signs facing the trail cause confusion. Here’s what we wrote in 2015 having no idea that such stop signs would prove controversial:

There are also significant safety improvements at driveways and street crossings. In fact, our other regional trails can learn a lot from the way these crossings are handled (I’m looking at you, Burke-Gilman Trail through UW, near U Village and in Kenmore).

Stop signs point to the streets and driveways, not the trail. This gives clear priority to people walking and biking without confusing anyone about who goes and who waits. Just like at any other crosswalk, people driving must stop and yield.

In practice, people biking just rarely stop. They approach with caution, make sure the person driving is stopping at the crosswalk, then cross. They aren’t being lawless when they don’t stop, the laws just don’t make sense. It’s easier and quicker for everyone if the user with the right of way just goes. Pointing a stop sign at the trail sounds like it would help safety, but it makes things worse. The worst case happens when someone driving sees the stop sign facing the trail and assumes that means they don’t need to stop for the crosswalk. That’s how people get hurt.

When a trail is crossing a busy arterial street, the crossing design best practices change. But these streets are very low traffic, serving a handful of lakefront homes. In fact, one of the arguments made by City of Sammamish Public Works Director Steve Leniszewski is actually a perfect argument for stop signs facing the road instead of the trail.

“[F]rom the lakefront homes, he noted that the road curves just before the trail crossing, limiting the sightline and the distance a car has to stop,” the Seattle Times reports. Sight lines are bad for people driving, so Leniszewski wants them to continue across the trail without stopping? That’s definitely not safe.

So come on, City of Sammamish, drop your legal fight. You’re wrong on this stop sign issue, and your delays are costing the public money and delaying the creation of what will be an amazing regional trail and an incredible asset to the City of Sammamish. The County is following trail engineering best practices. And all you have to do to see how well it works is walk, bike or drive a mile or so up the lake to see it in action for yourself on the completed section of trail.

Of course, this stop sign legal action is just the latest in a long line of challenges from people fighting this trail over many years. This likely isn’t about the stop signs at all, it’s just an attempt to find a technicality to further delay the project. In which case, please stop. There are so many issues in our region that you could invest your legal funds and energy into. Stopping a regional biking and walking trail along an old rail line shouldn’t be the one you focus on.

If you want to stay up to date or get engaged on advocacy for the trail, Cascade created this action alert signup: