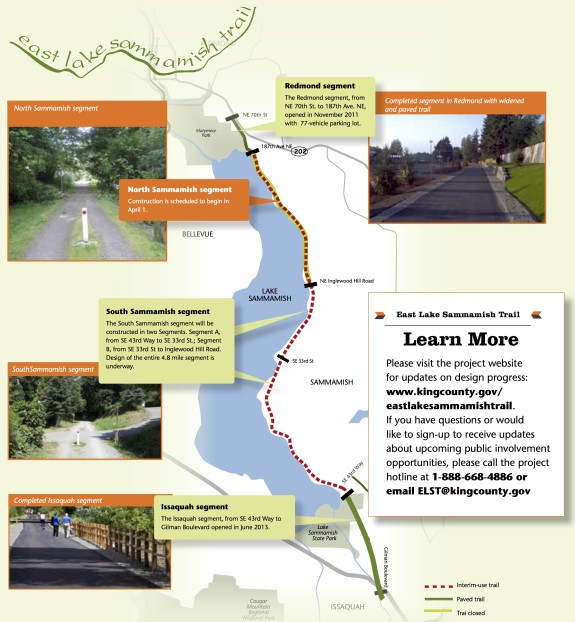 King County Parks is ready to start work to reconstruct and pave the north section of the East Lake Sammamish Trail. During construction, the existing soft surface trail will be closed.

Work begins April 21 and is expected to last a year.

When fully complete, the trail will create a paved and separated bike route all the way from the Burke-Gilman Trial in Seattle to Isaaquah.

The gap is shrinking in King County’s 175-mile regional trail system, as King County Parks begins construction on improvements to the North Sammamish segment of the East Lake Sammamish (ELST).

Safety is King County’s top priority during trail construction, and because of the extensive amount of work, narrow corridor, steep terrain, and limited access, this segment will be closed for approximately one year. Trail users are advised to find alternate routes around the closed portion.

Nearby East Lake Sammamish Parkway features both bike lanes and sidewalks for ELST users who want to travel along the eastern shoreline of the lake and around the closed stretch of trail. For recreation, trail users are encouraged to visit other trails in King County’s 175-mile regional trail system.

Safety and accessibility for all trail users will be improved with a new, 12-foot-wide paved corridor with 2-foot-wide soft surface shoulders on each side, enhanced intersections, clear sight lines, four fish passable culverts, retaining walls, improved drainage and landscaping.

The contractor for this project is Tri-State Construction, and the estimated cost of completing the North Sammamish segment is $6.2 million.

Funding is provided by the voter-approved 2014-19 Parks, Trails and Open Space Replacement Levy, as well as by grants from the Transportation Enhancements Program, the federal Congestion Mitigation and Air Quality Program and state Washington Wildlife and Recreation Program.

This project is the third segment of the ELST to be converted from the interim soft-surface trail to the finished master-planned trail. The Redmond segment was completed in 2011, and the Issaquah segment was completed in June 2013. The South Sammamish segment will be constructed in two phases, following completion of the North Sammamish portion of the trail.
King County purchased the 11-mile-long East Lake Sammamish rail banked corridor in 1998. An interim soft-surface trail was completed and opened to the public in 2006.
The ELST follows a historic railroad route along the eastern shore of Lake Sammamish within the cities of Redmond, Sammamish and Issaquah. Part of the “Locks to Lakes Corridor,” the trail follows an off-road corridor along the lake and through lakeside communities.

Once the ELST is fully developed, it will be part of a 44-mile-long regional urban trail corridor from Seattle’s Ballard neighborhood to Issaquah. More information is available at www.kingcounty.gov/eastlakesammamishtrail.

Founder and Editor of Seattle Bike Blog.
View all posts by Tom Fucoloro →
This entry was posted in news and tagged e lake sammamish trail. Bookmark the permalink.