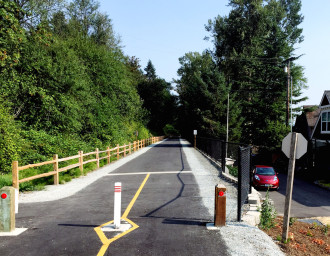 The North Segment of the E Lake Sammamish Trail was completed recently. Imagine how a tree in the trail path would create a dangerous situation.

King County Parks is in a legal battle with the City of Sammamish over plans to complete the E Lake Sammamish Trail between Redmond and Issaquah. And due to this battle, construction has been delayed on Segment A near Issaquah. Crews were supposed to begin work this fall.

Sammamish issued a construction permit in July, but with 19 conditions. And if you read through them, it becomes clear very quickly that a lot of lawyers and money got involved in this process (median household income in Sammamish is about $144,000 compared to the county average of $68,000). If you want a taste, try reading the permit language (PDF). The 19 conditions are at the end under “Conclusions.” More documents are available on the City of Sammamish project website and from King County (PDF).

The most clear conflict point comes down to trees. In order to meet modern trail safety standards for width and sight lines, some “significant” trees (trees taller than 4.5 feet) will need to be removed. These safety standards exist to prevent people from colliding head-on, which the only real danger on a separated trail like this.

Of 250 such trees in the project area, 221 will be saved and 29 will be removed (less than 12 percent of the total). King County plans to plant trees and other vegetation all along the trail to replace any that is removed for construction.

But the Sammamish-issued permit requires King County to squeeze the trail “as necessary” to save nearly every tree.

A particularly complicated section of trail shows which trees can be saved (S) and which will be removed (X). Others will need to be monitored (PH)(M). See the full document here.

Not only would squeezing the tree in places create “a lesser trail” — as Christie True, Director of the King County Department of Natural Resources and Parks, put it in a press release — but it could also result in injuries.

“Simply put, many of the 19 conditions in the city’s permit preclude us from building a safe trail with good sightlines and enough width to meet regional trail standards,” True said in the statement (read the full release below). As you can see in the map above, some trees are simply in the middle of the planned trail.

The fact that King County is appealing these conditions is significant because our region does not need any more sub-standard facilities for biking and walking. When making this kind of investment in an important transportation and recreation corridor like this, we have to do it right. A trail like this is a long-term investment in mobility and quality of life, and it’s a lot harder to go back and find the funding to fix mistakes later.

And in case you are skeptical that the county’s plan really is high-quality, you can head over to Lake Sammamish right now and take the Pepsi Challenge. The North Segment of the trail was completed and opened a few months ago and transitions abruptly to the old gravel trail. And as we reported, it’s already getting a lot of use.

In short, it’s probably the best-designed trail in the whole region. It’s the product of a whole lot of lessons learned, both in King County and around the nation. The County’s designers know what they’re doing when they make new trails, and they know we simply can’t ignore safety standards. 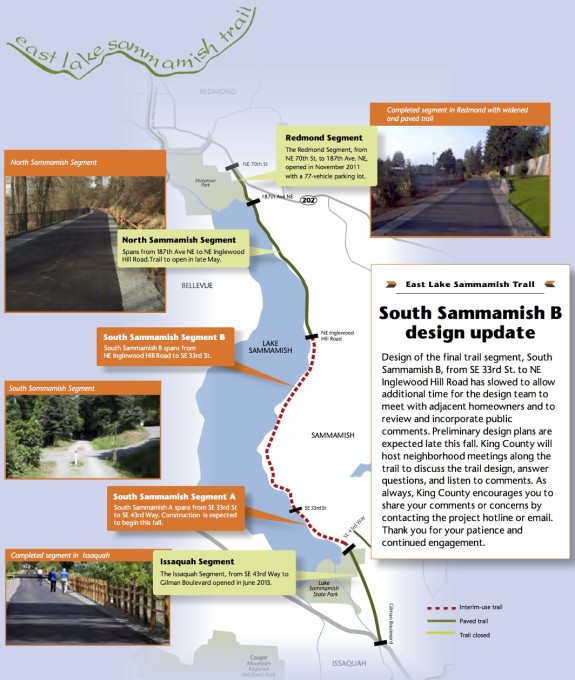 Remember, this trail will be a direct link between bike routes in Issaquah (including the I-90 Trail) and Redmond with huge potential for increases in bike traffic in coming decades. We’re not designing the trail to meet today’s existing users, we’re designing it for an even busier future. If we squeeze it down today, we will regret it later.

I hate the idea of tearing down mature trees. I’m sure the County doesn’t like it either (this is a King County Parks project, after all). If you read through the documents (here’s the tree evaluation PDF), you can see that planners really did evaluate every tree and saved all they could without compromising the project. In the end, they say they need to cut down 12 percent of the significant trees along the trail and replace them with new trees.

But the greater good of having a safe, comfortable and high-capacity human-powered transportation facility is a strong trade-off. It’s also a linear park that improves recreation and lake access for everyone.

It’s been a long, hard slog to get to this point. Lots of heated emotions from people who really want to realize this vision and from some lakeside homeowners who really want to stop it. The existing plan is the product of a ton of community input and inch-by-inch evaluation. It’s sad to see it head to the legal system this close to the finish line.

I hope the City of Sammamish can see the greater good in what the trail will do for the community, and I hope the legal process does not drag out forever as it has for so many other trail projects in the region.

Citing safety concerns, King County Parks has appealed a shoreline substantial development permit from the City of Sammamish for redevelopment of a portion of the East Lake Sammamish Trail (ELST) within the city limits.

About one year ago, King County applied for a city shoreline permit to redevelop this 1.3-mile stretch of the ELST. Since that time, Sammamish and its residents have requested numerous design and plan modifications that King County has incorporated into the current trail redevelopment plan for the stretch of trail, known as “South Sammamish Segment A,” which runs from Southeast 43rd Way to Southeast 33rd Street.

On July 7, Sammamish issued a shoreline substantial development permit for the South Sammamish Segment A, but included numerous conditions in the permit, which King County is appealing.

“Simply put, many of the 19 conditions in the city’s permit preclude us from building a safe trail with good sightlines and enough width to meet regional trail standards,” said Christie True, director of the King County Department of Natural Resources and Parks. “The public has had access to recently completed portions of the trail, and it has been proven to be very popular. These conditions would result in a lesser trail for the residents of Sammamish and King County.”

“In the spirit of working cooperatively with Sammamish to redevelop this important public amenity, King County has agreed to numerous additional requirements and made other modifications to the trail design,” True said. “We look forward to the redevelopment project moving forward in a timely manner – for the benefit of Sammamish, and for all King County residents.”

According to Sammamish’s development code, King County Parks is required to build a trail to national guidelines as outlined by the American Association of State Highway and Transportation Officials (AASHTO).

However, several of the conditions included in Sammamish’s shoreline substantial development permit for South Sammamish Segment A would result in a trail that did not meet those required AASHTO guidelines, including suitable width, sufficient sightlines, soft-surface shoulders, and other important safety factors.

The ELST follows a historic railroad route along the eastern shore of Lake Sammamish within the cities of Redmond, Sammamish and Issaquah. Part of the “Locks to Lakes Corridor,” the trail follows an off-road corridor along the lake and through lakeside communities.

King County purchased the 11-mile-long East Lake Sammamish rail banked corridor in 1998. An interim soft-surface trail was completed and opened to the public in 2006, and redevelopment into a master planned regional trail has been ongoing since then.

All of the construction, including any tree removal, regrading, paving, landscaping and other work, has occurred within the King County right of way. No work has occurred on private property.

Once the ELST is fully developed, it will be part of a 44-mile-long regional trail corridor from Seattle’s Ballard neighborhood to Issaquah. More information is available at www.kingcounty.gov/eastlakesammamishtrail.

And in case you aren’t already convinced that the trail is really nice (as are project staff), King County put together this video: