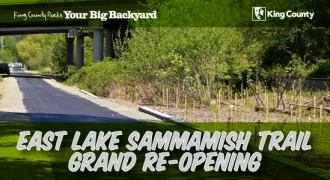 King County Parks is ready to celebrate the opening of the newly-paved East Lake Sammamish Trail between the lake and Issaquah.

Formerly covered by crushed rock, the section is just the second segment in a series of planned paving projects that will one day connect Redmond to Issaquah with a fully accessible trail.

Join us for a celebration on the trail!

Join us as we cut the ribbon and re-open the newly developed trail segment, a 2.2-mile-long section from SE 43rd Way
to Gilman Boulevard.

The trail has gone from a crushed rock surface to a 12-foot-wide paved trail with 2-foot soft-surface shoulders on each side, making it more accessible to bicyclists, skaters and trail visitors of all ages and abilities. We’ve also improved safety by enhancing intersection and road crossing treatments, among other design improvements. The ELST follows an historic railroad route along the eastern shore of Lake Sammamish and connects the cities of Redmond, Sammamish and Issaquah.

Funding for this project was provided by the 2008-2013, voter-approved Open Space and Trails Levy, the Washington Wildlife and Recreation Program, and the Federal Highway Administration.

Map of the recently-completed segment: