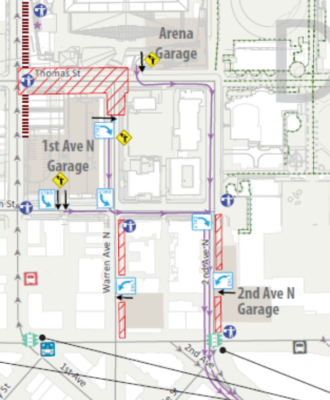 The car traffic plan for the arena’s new parking garages. From a presentation to the Seattle Bicycle Advisory Board (PDF)

As part of the transportation plan for the new arena in Seattle Center, developers and the City of Seattle are currently planning to delete the north end of the 2nd Ave protected bike lane and steal crossing time from people walking on Denny Way, all in a hopeless effort to move more cars.

These plans, first reported by Ryan Packer at The Urbanist, go against our city’s transportation and climate policies and goals, fly in the face of clear community concerns about so-called “adaptive” traffic signals and would rewind some of the incredible bike progress our city has made thanks in large part to the 2nd Ave protected bike lane. City leaders should demand SDOT and the arena team come up with a better plan that encourages biking, walking and transit rather than driving cars.

Driving will never be a good way to get to Seattle Center. Even if they follow through on their plan to cut down on biking and walking access to try to squeeze a few more cars in and out of the area, they will fail. This isn’t theoretical. There is no path to success if they are defining success as moving lots of cars through Uptown, South Lake Union and Belltown. They will fail, 100 percent guaranteed. But they can succeed in making it more difficult, dangerous and time-consuming to bike, walk and take transit as their current plans would. We should not let them.

Since this is Seattle Bike Blog, let’s start with the 2nd Ave bike lane. In order to better serve people who drive cars all the way to the new planned garages just a block or two from the area, the plan would delete a section of the most successful and impactful new bike lanes in the whole city in order to create a second lane for cars on 2nd Ave at Denny. Instead, people biking would be routed onto an almost-certainly crowded sidewalk. So people biking and walking get squeezed together in half the space they have today while people driving get double the space. 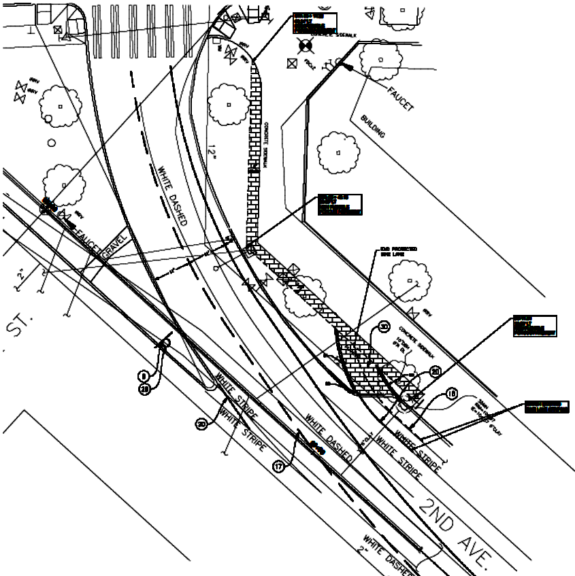 As we have reported, biking is booming right now. The number of trips by bike this year is obliterating the previous records, and this is in no small part due to bike improvements like the 2nd Ave protected bike lane. To replace this bike lane so that parking garages can empty out faster following events is simply wrong. It is backwards. It must be stopped.

The arena plan does include a new protected bike lane that winds blocks out of the way to 1st Ave and Queen Anne Ave (1st is two blocks from 2nd here because lol Seattle streets). Those new bike lanes would be great for serving the Uptown business district and beyond, but they are far less direct for people heading to Seattle Center. And Seattle Center is not only a pretty big destination, it is also a wonderful and popular bike cut-through for people heading to various places, including 5th Ave, the Mercer Street bike lane under Aurora and, soon, Thomas Street to South Lake Union.

People who drive to the parking garages for an event can just wait their turn to get out using the lane that exists. It should be expected that if you drive to a Seattle Center event, it’s going to take some time to get out of the parking garage at the end. We should not destroy our best bike route in a vain attempt to let them get out a little faster. Pacing the cars leaving the garages might even help alleviate the traffic problems on other streets in the area, so it’s not a bad outcome.

The 2nd Ave bike lane helps move people 24/7. It is absurd to ruin it so that very temporary event crowds a few times a week can drive away a tiny bit faster. It doesn’t even play a role in pre-event traffic, only post-event.

Instead, they should extend the 2nd Ave bike lane two more blocks north to connect seamlessly to Seattle Center’s car-free center. That would have a more tangible and positive impact on all-way, all-day mobility on this street and it would be an investment in a future that we want, not an investment in furthering the traffic-clogged nightmare we already have.

The city’s so-called “adaptive” traffic signals on Mercer Street have been the subject of intense scorn from neighbors and advocates for more walking because they basically just steal time from people walking and give it to people driving. I think the designers and promoters of this system think they are being more sophisticated than that, but they aren’t. Their fancy systems don’t count pedestrian delays, they only count car delays. In order to cross the street, you have to push a button to get a walk signal at all, then you have to wait. And wait. And wait. The more car traffic there is, the longer people walking are forced to wait. That’s the “adaptive” part. It adapts to bad car traffic by making people who are not contributing to car traffic wait more. And in case you haven’t noticed, traffic on Mercer is still terrible. The adaptive signals just make sure it’s also terrible to walk there.

Well, it worked so poorly on Mercer that the arena team and Seattle are currently planning on doing the same thing on Denny Way. Denny Way is full of cars. Nothing can be done to the signal timing to change that. The only fix for Denny is to prioritize more efficient ways to move people on that street.

Established city transportation policy, codified in just about every document approved by the City Council in the past decade, is that our goal is to move people and goods, not just cars. The current plan for Denny is so blinded by the goal of moving cars that it is destined to to fail everyone, people driving included.

Denny has a major bus route, King County Metro’s Route 8. It’s one of the busiest routes in the entire county. And everyone who has ever ridden it knows the 8’s nickname: The Late. What if instead of trying to cram more cars onto a street that’s already full of them we try to liberate the 8 from traffic and make it the obvious best way to get up and down Denny Way? Denny is diagonal street that breaks the grid, which makes it extremely important for transit and walking especially. A fast, reliable bus on Denny would be transformative to our city. Driving will never be a good way to get around the Denny Triangle, Belltown and South Lake Union. There’s nothing the city can do about that. But the city can build bus lanes and free the 8.

Money planned to go to Denny Way adaptive signals should go to transit improvements instead. Again, this would be the option consistent with our city’s transportation and climate policies and goals.

Mayor Jenny Durkan made a pretty strong statement this week in support of safe streets. And during her talk, she said, “If you don’t have to drive, do not drive. Get out of your cars. If you can get on a bike, if you can walk, if you can bus or light rail, please do that. If you have to get in your cars, slow down. You are not going to get there that much faster by going faster.”

Right on, Mayor. I think the arena traffic plan team needs to hear this message from you, too.

I hope she directs SDOT to revisit these two car-blinded elements of the arena plan and come back with investments that align with our city’s vision for big increases in walking, biking and transit. Because that vision is more important than reducing the wait time for people trying to drive out of a garage immediately following an event. This process has gone sideways, and we need city leaders to recenter it on our city’s real goals. Let’s move more people safer and more sustainably.