Expedia is preparing to start moving from Bellevue into their new campus on the Seattle waterfront starting as soon as next year. And work is very clearly in high gear across their huge new space.

For the past year, the Elliott Bay Trail has been detoured around the campus work zone while crews went to work on a project to rebuild and significantly expand the trail and nearby park area where Smith Cove meets the bay.

And, yeah. It’s pretty great. Check it out in the video above.

For folks heading southbound, the Elliott Bay Trail has just meandered through a very industrial stretch of Interbay next to busy rail lines. Then the trail takes you past Smith Cove and the cruise ship terminal, and you start to get your first glimpses of the bay. 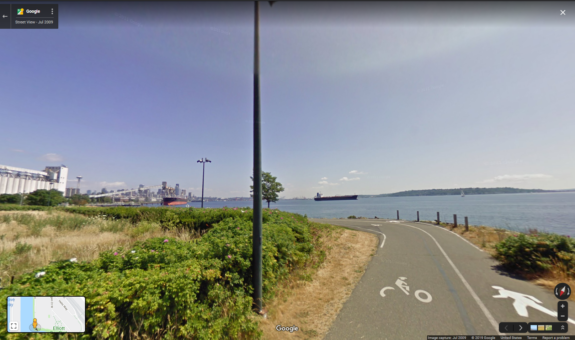 Previously, the trail made a sharp turn just as the bay and downtown Seattle came into view. This was kind of cool, but also a bit cramped and unnerving. Your attention was sort of pulled in two directions: Check out that amazing view, and make sure you don’t run into anyone behind the blind curve.

Now, the space is much more wide open with a wide, gradually-curving trail. There’s also a terraced little hill you can climb up and just sit for a while and enjoy one of the best views in the city. 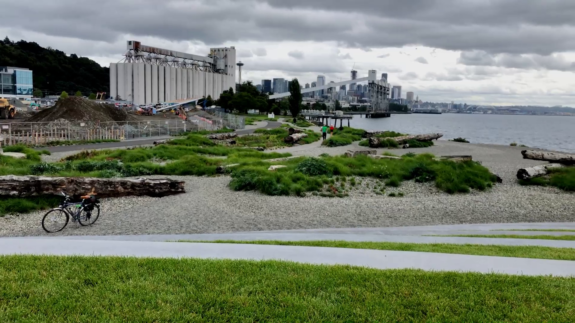 And this trail is not just for looks. Expedia needs to figure out how to get their 4,500 employees to this new campus, which has limited transit connections compared to, say, South Lake Union or downtown. And as you bike by the campus, you’ll see some massive car parking structures there, ready to house 2,300 cars. That’s a lot of driving, and a lot of time waiting on an even more crammed Mercer Street. No thank you.

Especially if the Elliott Bay Trail were fully connected to the downtown bike network (a key part of which was left out of the city’s recent short-term bike plans), this trail could do a lot of heavy lifting for the company’s commutes. It’s an absurdly wonderful way to get to work. Possibly one of the best commutes in the world. So I hope the company is lobbying Seattle hard to get them to complete the connection between the future waterfront trail and the Elliott Bay Trail as soon as possible.

Founder and Editor of Seattle Bike Blog.
View all posts by Tom Fucoloro →
This entry was posted in news and tagged elliott bay trail, expedia, interbay, video. Bookmark the permalink.