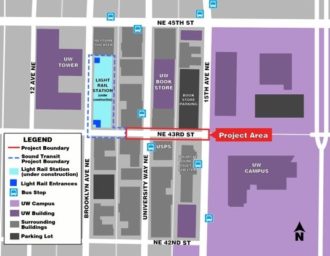 U District Station is going to change everything about the neighborhood when it begins operating in 2021, and the streets should reflect that. Located at Brooklyn Ave and NE 43rd Street, the main station entrance should be supported by streets that reflect the walking, biking and transit focus needed to help it succeed and thrive.

Today, NE 43rd Street dead ends into the station construction site halfway between the Ave and Brooklyn. The street also dead ends into UW Campus at 15th Ave NE. So it is not a necessary street for car movement, making it a great candidate to go car-free. Unfortunately, concepts floating around shy away from going fully car-free, which is a shame.

One big goal needs to be increasing the walking space to accommodate the more than 20,000 daily riders expected. Another goal, of course, is bike access. Bus access is a bit up in the air because it’s not fully clear whether buses will need to operate on the street or if they would be better serving the station via Brooklyn. However, plans seem to assume westbound bus operations complete with new trolly wires for the re-routed bus routes.

The U District Mobility Group and SDOT have two different concepts at this point, and the UDMG is currently taking feedback via an online survey.

Both concepts significantly widen the walking spaces, and both have potential. But the devil is in the details for both of them. So I’d like to hear from you all in the comments below. 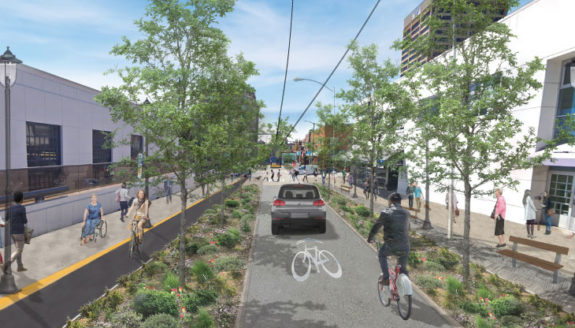 SDOT’s design definitely looks a little strange at first. It has a protected bike lane eastbound, but the single westbound lane would be shared by people biking, buses and even … cars? Well, this is where the details become important. The SDOT design would allow all vehicles on the one block between 15th and the Ave, switching to transit and bikes only west of the Ave.

How will the city prevent illegal driving west of the Ave? This question is vital. As we have seen with the Bell St “park” in Belltown, signage alone will not be enough to prevent people from driving there. And if this street gets clogged with cars, the bike access, transit efficiency and walkability goals will be hurt. But if they have a physical car diverter plan, then this option could work.

If planners decide against serious, physical traffic diversion, then they should build bike lanes in both directions. And there also needs to be space for people biking to safely pass buses at bus stops or this shared lane concept won’t really work as a bike route.

The city describes their design as curbless, so you could imagine it as Bell Street, but with a separated counter-flow bike lane. 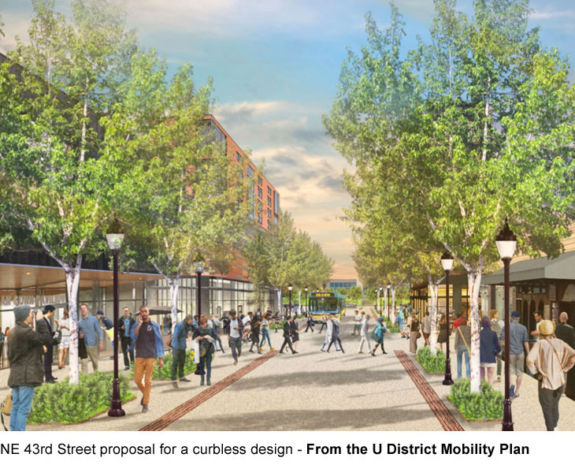 The U District Mobility Plan concept looks a lot like the Bell Street “park” in Belltown and gets rid of the bike lane. It’s a curbless street, and road edges are marked by tactile strips for accessibility. The concept would be open to transit, biking and “local traffic.” Hmm.

As we’ve learned from Bell Street, this design works really well when there are no cars, but falls apart once people start ignoring the signs banning through car traffic. And since there will be significant demand for pick-up and drop-off at the light rail station, this street concept would fall apart if it becomes clogged with cars. And simply posting signs will not work. Physical car diverters are needed, which is a challenge when you are trying to allow buses.

But if car traffic is removed or severely limited, then no bike lane would be necessary. The benefits of a curbless street is that people can take over the space. Sidewalks can spill into the road, which is a good thing. You can imagine cafe seating and street festivals and all kinds of cool stuff here. But it has to be done right or cars will just fill the whole space like they always do.

This concept is also set up better for going car-free, which should be the goal for this street, especially for the blocks adjacent to the station.

Founder and Editor of Seattle Bike Blog.
View all posts by Tom Fucoloro →
This entry was posted in news and tagged sdot, u district, u district mobility plan, u district station. Bookmark the permalink.