Brooklyn Ave reopens today near U District Station, signaling the start of a new era for the neighborhood 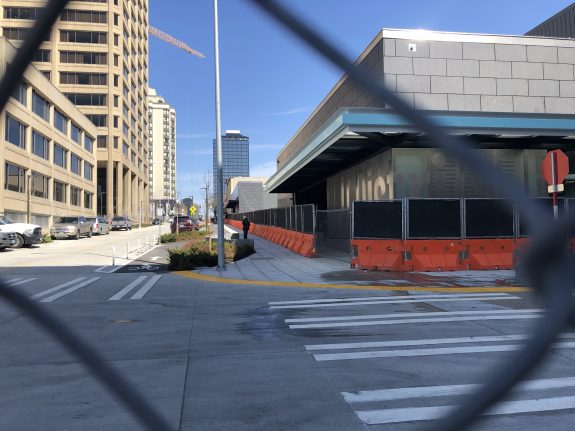 After eight years behind construction barriers, Brooklyn Ave NE and NE 43rd Street are finally starting to reopen today, Sound Transit announced. Brooklyn will open to all traffic while 43rd will open sidewalks.

This is a big deal for the neighborhood and a reminder that the opening of Brooklyn Station…ahem, I mean U District Station is getting very close. There is still no official opening date, but test trains have been running on the tracks up to Roosevelt and Northgate Stations. The current service plan calls for a September start, though train deliveries have been delayed. Each train needs to operate for a certain number of hours without any faults before it can go into service. So fingers crossed that all the testing goes smoothly.

Brooklyn’s street design is a big miss, unfortunately. It has a sidewalk-level protected bike lane headed uphill in the northbound direction, which should be lovely. But then people headed southbound are expected to mix with car traffic. It’s so strange. Who is the target user of this street? Who will decide to bike to the station because there is a comfortable bike lane in only one direction? There is space for a downhill bike lane, but instead SDOT and Sound Transit prioritized on-street parking on both sides of the street. Hopefully SDOT will closely observe car traffic on this street and will be ready to make significant changes to limit volumes and speeds if needed. This should also be an opportunity to improve the nearby 12th Ave neighborhood greenway, one of the worst in the city due to its relatively heavy car traffic thanks to people driving around the closed Brooklyn Ave.

A failed design concept for a “mall” on the Ave from 1972, as published in the Seattle Daily Times (PDF).

Brooklyn is also just one foot too skinny for two-way bus service, a huge priority for the advocacy group U District Mobility. This could make it more difficult to someday turn the Ave and NE 43rd Street into the car-free (or car-light) spaces they should be, a dream of many people in the neighborhood going back half a century.

I’m not sure the city has yet to fully comprehend how much the U District is about to change. There are a lot of buildings under construction right now, and more are in the queue. It’s one of the few areas of the city that allows towers, and it is about to get a subway that brings it just minutes away from the heart of Capitol Hill and downtown.

With Brooklyn and 43rd closed since 2013, the neighborhood has felt a bit like a construction zone. But it’s about to open back up just as COVID vaccine rates start to gain steam (though Washington is currently seeing a spike in cases, so it is too soon to stop following the pandemic protocols!). But as the pandemic fades and the station opens, the neighborhood could assume its role as one of the biggest hubs of activity in our city. It will be transformative.

As a nearby resident (I live between Wallingford and the U District), I think the name “University District” really misleads people because there is so much more going on than simply being near the university. This is one reason I am stubbornly still calling it Brooklyn Station (the other being that there is already a “UW Station” so “U District Station” is just a confusing name and no I’m not over arguing about this yet. People are always like, “Brooklyn is in New York,” as though Beacon Hill isn’t in Boston or Capitol Hill isn’t in DC or Pioneer Square isn’t in Portland. Lots of places are named after other places. Brooklyn has long been used as one name for the neighborhood, and it’s way cooler than U District. OK fine I’m done ranting. For now.)

Of course, major change can be positive and negative. There is still a lot of underutilized space in the neighborhood, including large surface parking lots, that are now being developed into housing and business space. That’s a good thing. The Ave is one of the best business districts in the city because of its many small storefronts and diversity of business types. More people in the area means more potential customers, which could be great. But will these small businesses, many of them owned by people of color, be able to survive if/when rent increases? I hope so. The neighborhood also has a lot of affordable housing (or at least what passes for “affordable” in Seattle). A lot more housing is opening in the area, so will the city’s mandatory housing affordability rules be strong enough to offset the increased demand? City leaders will need to pay close attention.

After more than a year of following pandemic guidelines, it’s hard to imagine a fully reopened U District complete with light rail service. It almost feels like a dream. But it’s really happening, and I can hardly wait (but, seriously folks, please keep waiting).

This entry was posted in news and tagged brooklyn, the ave, u district, u district station. Bookmark the permalink.

15 Responses to Brooklyn Ave reopens today near U District Station, signaling the start of a new era for the neighborhood