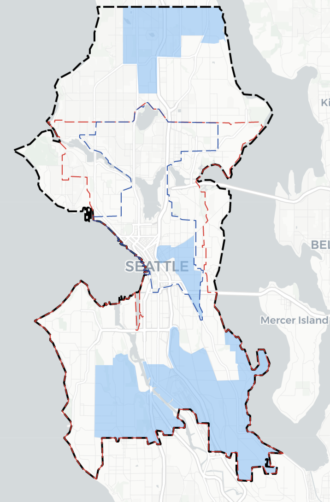 Previous service areas are outlined in blue and red dashes. Image from JUMP.

After adding more bikes and changing its fare structure this week, JUMP’s red bikes now reach all of Seattle and cost $1 less to ride than Lime’s green and yellow bikes.

JUMP initially launched Seattle service in November with a limited coverage area that excluded most of South Seattle, but quickly expanded to reach most of the city south of Green Lake in December. Now the Uber-owned service has expanded to the city limits while also challenging Lime on price.

Both services charge $0.15 per minute to ride their e-assist bikes, but JUMP has removed the $1 unlock fee that Lime still charges.

Removing the unlocking fee is great news for a couple reasons. For one, it opens the next chapter in price competition for the free-floating shared bike services in Seattle. But it also removes a barrier to using the service for short trips or for chaining bike share and transit together.

While the $1 unlocking fee is not exorbitant, it does make very short rides make less sense. Bike share is very effective at turning 15-minute walks into five-minute bike rides, but paying $1 for every little five-minute bike ride really adds up when you get into the habit. Biking to and from a grocery store that is only five minutes away turns into a $2.75 round trip, same as a transit fare that is good for two hours. But without the $1 unlock fee, the same grocery store round-trip costs only $1.50, which feels more appropriate for a neighborhood grocery run.

Removing the $1 unlock fee also makes it more sensible to string bike share and transit together because you don’t have to pay that $1 twice for the same leg of a trip. With the unlock fee, biking five minutes to a bus then another five minutes to get from the bus to your destination costs as much as the bus fare itself. For a round trip, the bike costs would be $5.50. That really adds up if you are relying on these kinds of multimodal connections daily, even though your total time using the bikes is pretty short.

Paying by the minute is also just simpler. You pay for what you use no matter how you work the bikes into your trips. The $1 unlock fee feels sort of like an artifact from docked bike systems (like Pronto) that charge a fee by the half hour. There have been many times I have chosen not to take bike share because it didn’t make sense to pay that amount for such a short ride. I am lazy, and I would gladly bike to save a few minutes of walking. So while removing the $1 fee might mean companies take a hit on some trips, there are likely more trips to be gained elsewhere.

It will be interesting to see how Lime responds, since that company now has many different options that all cost $1 to unlock (bikes and cars in Seattle, but also scooters elsewhere).

Here’s the JUMP press release about the changes:

Starting [March 5], the JUMP service area in Seattle will reach to the city limits. JUMP, Uber’s all-electric dockless bike share offering, initially launched in Seattle in November with a limited service area, and then expanded to include all of South and West Seattle in January.

“Since initially launching in Seattle, our priority has been to make JUMP bikes available to as many people as possible as quickly as possible, while efficiently and sustainably operating our network of bikes,” said Alejandro Chouza. “I’m thrilled we’re able to expand our service area to the entire city earlier than expected. We decided to do this because of how well our bikes have been received by riders.”

JUMP also offers a Boost Plan for qualified lower-income riders. Boost Plan participants receive 60 minutes of free ride time per day at a cost of $5 per month. Those who qualify for the ORCA Lift reduced-fare program or the Regional Reduced Fare Permit also qualify for the JUMP Boost Plan. Other plan details can be found at https://jump.com/cities/seattle/boost-plan/.

In addition to the service area expansion, JUMP is also updating its pricing in Seattle. At launch, baseline pricing was $1 to unlock a bike, then $0.10 per minute. Starting March 5, there will be no fee to unlock a bike and riding will be $0.15 per minute. Seattle was one of the first cities to receive JUMP’s next generation bikes, which feature integrated cable locks and a QR code unlocking mechanism.