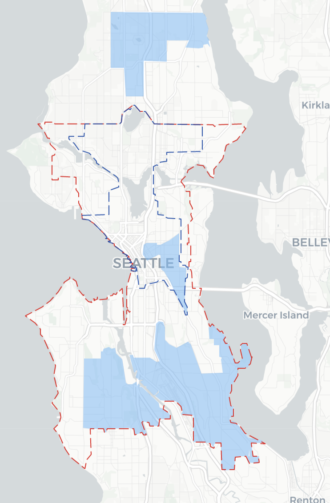 Phase 2 service area map is outlined in red. The initial launch area was within the blue dashed line. Image from JUMP.

Following a Seattle Times story critical of the company’s limited service area, JUMP has expanded to include all of Southeast and West Seattle.

Though the Times story headline says that JUMP has been charging people $25 for parking outside the service area, the company says it has not actually charged the fee to anyone yet. Instead they have issued warnings.

As we reported when the bright red bikes launched in November, their initial service area was limited because they only had 300 bikes. But as they grew they would expand the area. Their permit allows up to 6,666 bikes, though the company has not yet launched the bulk of them.

They will expand again in coming months to include the entire city limits, the Uber-owned company said in a statement today. They also announced that 2,000 bikes are on the way in coming weeks to shore up supply in the newly expanded service area. And they are bringing their newly redesigned bikes, which will have a much less bulky lock compared to the current square metal locks. Users will also be able to unlock them by scanning a QR code, similar to Lime’s bikes. 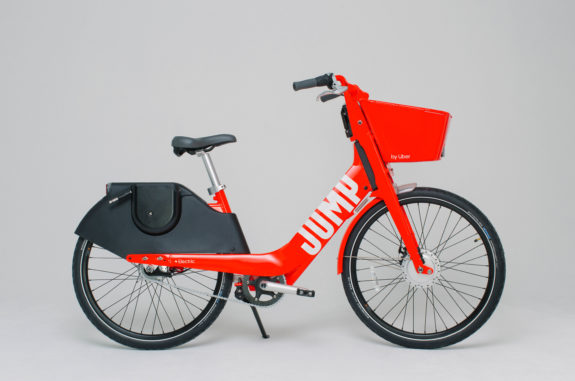 And to encourage ridership during the upcoming traffic crunch downtown, JUMP is waiving the $1 unlock fees through February 15. So you just pay 10¢ per minute.

Seattle Bike Blog readers were immediately critical of the limited service area in the company’s initial launch. Even though I understand the desire not to have a limited number of bikes spread to far apart, it was problematic to include neighborhoods all the way to Green Lake in the north but stop at Mount Baker Station in the south. Columbia City is closer to downtown than Green Lake, for example.

One lesson learned from the July 2017 launch of Spin and Lime was that it was so much simpler to just include the entire city limits in the service area, even if initial bike distribution was focused downtown. Many of the city’s pilot permit rules were based around trying to encourage companies to serve more of the city because the permit authors assumed companies would want to focus service in dense and often wealthier areas. But from day one both companies served the whole city, which was something of a surprise at the time. Allowing the whole city made it much easier for users to understand and immediately allowed any city resident to access their neighborhood using the bikes. And they did.

Limiting the service area feels a bit like overthinking one problem (bike density) and creating another bigger one in the process. It doesn’t feel good for a potential user to download the app only to find out that their home is excluded. And, of course, serving Green Lake before Columbia City sends the message that whiter and wealthier north Seattle neighborhoods are more important.

So it’s good to see the service area expand, and more bikes in service will help them compete with Lime’s ubiquitous green bikes.

Here’s the statement from JUMP:

Uber today announced the expansion of its JUMP bike service area in Seattle and an increase in the number of JUMP bikes in its Seattle network. Seattle is one of the first cities to receive JUMP’s next generation bikes, which feature integrated cable locks and a QR code unlocking mechanism. Roughly 2,000 new bikes will be phased into the Seattle network in the coming weeks.

“The initial reception of our bikes in Seattle has been very positive among riders, so we’re excited to expand access. It’s something we’ve been pushing hard to do since launching in November,” said Nathan Hambley, a spokesperson for Uber in Seattle. “We hope the expanded service area and additional bikes, along with the promotions we’re currently running, help people get around Seattle during the Squeeze.”

In December, Uber announced it would offer $2.75 off Uber trips to and from select transit hubs through Feb. 15 along with waving the $1 unlock fees on JUMP bikes to help people avoid driving downtown alone while SR 99 is closed along the waterfront.

Seattle’s initial JUMP service area was limited to a zone near the downtown core due to bike supply limitations, although it was drawn to include the entire Central District Equity Area as defined in the Seattle Department of Transportation’s 2018-2019 Free Floating Bike Share Program Permit Requirements (see Appendix D).

“We have met the bike availability targets in the Equity Focus Area boundaries defined in the permit requirements even in our initial service area since launch, and we will of course continue to adhere to those requirements in our expanded service area,” added Hambley. “As we wrote in our permit application, we believe bike sharing can help make cities smaller by connecting neighborhoods and making it easier for residents to travel, no matter where they live or where we have to go.”

In the coming months, JUMP will expand its service area again to include the entire City of Seattle.

In order to encourage riders to leave bikes inside the service area, JUMP provides notice in-app and on its website of a $25 fee for locking the bike outside the system area or bike zone. Although JUMP has issued warnings, no Seattle customers have been charged the $25 fee for ending trips outside the initial service area.