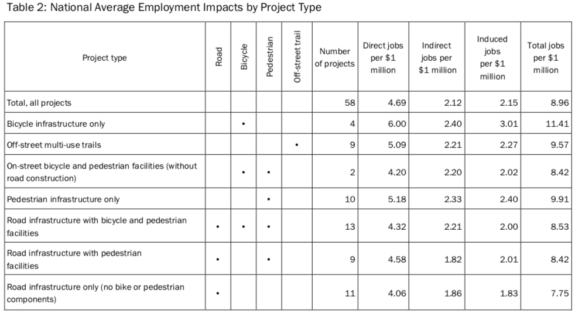 From a 2011 study (PDF) by Heidi Garrett-Peltier for the Political Economy Research Institute at the University of Massachusetts, Amherst.

Building walking, biking and safe streets infrastructure employs more people per dollar than a road-only project. In Seattle, building trails employs 25 percent more people per $1 million invested compared to building roads, according to a 2011 study (PDF) by Heidi Garrett-Peltier for the Political Economy Research Institute at the University of Massachusetts, Amherst. The work is more hands-on, so more of the costs go to paying workers rather than buying raw materials and equipment.

And while this is hardly the best reason to build bike lanes and trails, it is an important fact to keep in mind as Congressional leaders craft a “Green New Deal” that attempts to both improve the nation and employ more people at the same time.

The League of American Bicyclists recently posted their concept for a $74 billion “Bike New Deal,” which would invest heavily in community bike networks, regional and national bike trails, child bike safety education, commuter benefits, and vehicle and road safety standards. And while I imagine that $74 billion price tag might seem like a pipe dream, an effort of that scale would be a great investment directly into communities big and small across the country that would pay off for generations to come.

So far, the Green New Deal is more of a statement of intent rather than a set of specific policies, so it seems like a good time to start thinking big and getting ideas out there. And while Seattle Bike Blog rarely focuses on national issues, our time covering the challenges of building local and regional bike infrastructure and safe streets projects could help shine a light on ways Federal funding could dramatically change the speed and scale of project delivery for these projects.

One lesson comes from, yes, the Netherlands. The Dutch only have their bicycle networks now because their national government stepped up and made those networks a national transportation priority decades ago:

A national government just works on a larger scale that can complete projects that would be impossibly-large for local governments.

Even in a wealthy city like Seattle, our Department of Transportation has trouble finding funding to go after the biggest road safety and bike network challenges, many of which were caused by big Federally-funded, car-centric projects like Interstates and rail corridors in the first place. For example, it costs an enormous sum of money to create or retrofit freeway crossings to make them safe for walking and biking, so Seattle typically chooses to ignore them and invest elsewhere instead. The result is that there are shockingly few I-5 crossings that are safe and comfortable for biking and walking.

So let’s look at a case study: The Northgate Walk/Bike Bridge. The city’s first try to get the project funded was to apply for an Obama-era TIGER grant from the Federal government to build an iconic span connecting North Seattle College to Northgate Station. Because I-5 is so wide at this location and would require a rather tall structure, creating this vital connection would cost vastly more money than the typical walk/bike project. So the city appealed to the Feds.

UW also applied for a TIGER grant around the same time to complete their total rebuild of the Burke-Gilman Trail through campus, which would be wider and have separate walking and biking spaces to accommodate the big increases in people traveling to and from UW Station.

But TIGER grants were extremely competitive because, as it turns out, communities across the nation have an enormous backlog of major non-freeway infrastructure needs that the Federal government has not been addressing. The result is that both of these Seattle projects lost, along with more than 9 in 10 TIGER applications. The TIGER acceptance rate is a good rough estimate of the nation’s need for such funding. It needs to be an order of magnitude larger.

A result of losing these grants was that UW dramatically scaled back its trail ambitions by only building out one phase of the trail redesign, and the City of Seattle, Sound Transit and Washington State all partnered to make a scaled back Northgate Bridge happen. It was great that leaders found ways to make the projects happen without Federal funding, but what would have been small projects for the Feds has become huge projects for multiple local agencies.

And remember that Seattle is a wealthy city in a wealthy region, and we barely made the Northgate Bridge happen. Communities across the nation don’t have a fallback option for projects of this scale. If the Feds or their states don’t fund major projects like this, they simply can’t happen.

Or what about national biking and walking projects like the Great American Rail Trail or the US Bicycle Route system? State and local governments can work on them piecemeal, but the Federal government could make them happen in whole.

Of course Washington State also has a key role to play in fixing these major challenges that it is not fulfilling. But even the state would have trouble raising the funds needed to truly address the needs in Washington communities.

I don’t want this post to be seen as excusing Seattle, King County, Sound Transit, the Puget Sound Regional Council or Washington State from their responsibility to do better in prioritizing safe streets, walking, biking and transit improvements. But I am sick of writing off the Federal government as good for only a few relative pennies here or there for walking and biking projects. It’s a major need that needs major investment, including from the highest level.

Unfortunately, the U.S. is still obsessed with freeways, investing a fortune in impossibly-large interchanges and widening projects that only make traffic and our dependences on fossil fuels more dangerous and desperate. But it doesn’t have to be this way.