Want some company biking downtown? Join these welcoming West and SE Seattle rides or start your own 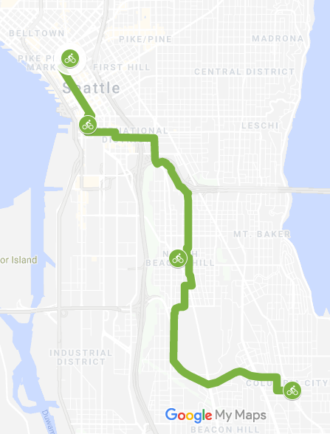 Biking on city streets can be more fun and less intimidating when you are with a group. And riding with a group can be a great way to become familiar with a route and learn some tips before trying it on your own.

So as a lot of people are looking for other ways to get around during the upcoming closure of SR 99, this is the perfect time for people to get together and ride downtown as a group.

West Seattle Bike Connections is leading the way. The group already held one ride for neighbors last weekend, helping 28 adults and 4 kids learn how to navigate the industrial streets and paths on the way downtown.

The group is hosting another SurviveRealign99 ride 9:30 a.m. Sunday. Meet at the Starbucks at 4100 SW Alaska St.

The SE Seattle Bike Train, which Seattle Bike Blog has helped get started, will host an inaugural ride 7 a.m. Monday and a weekend orientation ride January 20 for those who want to try the route outside of rush hour. The plan is to host weekly rides every Friday, at least. The route will go from Columbia City to Beacon Hill Station to Pioneer Square to Westlake Station.

So if you live in West of SE Seattle, you should get involved with these efforts. The more energy and volunteer power, the more (and longer) rides will be possible.

And if you live anywhere else, what are you doing just sitting there reading this post? Grab a couple neighbors and get organized. Kimberly Kinchen, who was previously an organizer of NYC Biketrain, is helping to organize the Seattle Bike Train effort. She has put together a handy FAQ you can use to help get started.

Rides should be for people of all experience levels, but the focus is on helping people new to city biking. It should move slow enough that everyone can comfortably stay together, and there should be at least a few experienced volunteers to bring up the rear and help folks along the way as needed. So while regular riders should be welcome, they should know that the ride will likely move a lot more slowly than they are used to.

Pick a route that won’t be too intimidating for folks to try on their own and that will work well for a group, choose a good meet-up spot in your neighborhood (a coffee shop is not a bad idea, though a covered area in a park could work well, too), then pick a time and day to give it a try. Hosting a weekend ride might also be a good idea.

If you are organizing (or want to help organize) a bike train in your neighborhood, let us know in the comments below. Seattle Bike Blog can help spread the word, but you should also spread the word locally.

5 Responses to Want some company biking downtown? Join these welcoming West and SE Seattle rides or start your own