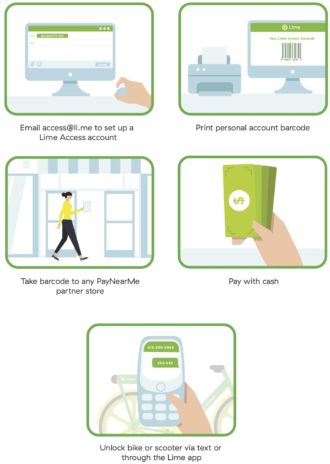 A nickel. In 2018, there is essentially nothing that costs a nickel.

But that’s all it costs for qualifying low-income users to unlock a Lime pedal bike under the company’s newly-expanded Lime Access program ($5 for 100 rides). And qualifying users (see #4 below) can also now pay in cash and unlock bikes using any mobile phone that can send text messages or make calls, allowing people who don’t have a bank account and smart phone with a data plan to use their bikes.

Qualifying users can also access Lime’s e-bikes at half price (50 cents to unlock plus 7 cents per minute). So a half hour e-bike ride would cost about the same as bus fare ($2.60).

To get set up, the Lime Access webpage tells users to email [email protected] the following:

It will take Lime staff up to two days to get accounts verified and set up. Users will also need access to a printer if they don’t have a smart phone so they can print a unique barcode they can use to load money into their accounts at any ParNearMe location, including the 50 or so 7-Eleven and CVS stores in Seattle.

As ofo closes down Seattle operations and Spin pivots to scooters (which are not yet allowed in Seattle), Lime has emerged in recent weeks as the primary bike share company in town. That could change as the city’s revamped bike share permit rolls out in the coming months, allowing new companies to compete with Lime. But for now, Seattle’s a Lime town.

At 5 cents for a pedal bike ride, Lime is all but giving those rides away. They just want folks to register. Perhaps this will also help prevent people from cutting off or disabling the locks on the bikes, since they can just access them legitimately for so little money.

$1 per ride was already the most affordable way to get around town other than walking (and maybe riding your own bike, depending on your bike costs). But at 5 cents, there is no cheaper way to get around. In a town where costs only seem to rise, shared pedal bikes offer a rare and very needed reduction in costs. This is why we have argued that the city should be doing whatever it can to encourage companies to provide the lower-cost pedal bikes in addition to their electric options.

Founder and Editor of Seattle Bike Blog.
View all posts by Tom Fucoloro →
This entry was posted in news and tagged bike share, limebike, ORCA Lift. Bookmark the permalink.