Lime’s newest model is the best shared bike yet + Is it time to ditch the $1 unlock? 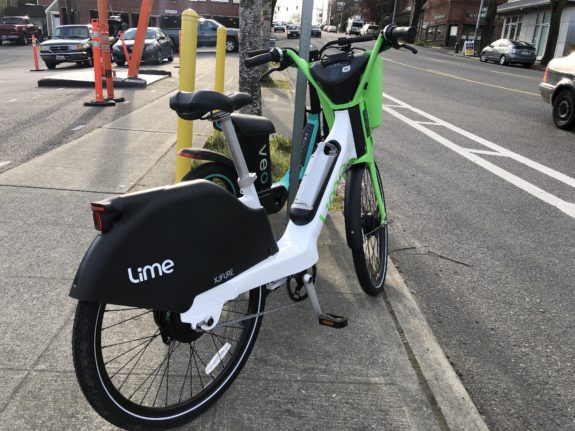 In terms of quality and ease of use, the newest Gen4 Lime e-assist bike is highest-quality model of shared bike yet to hit Seattle streets, and a sign that the company has no intention of abandoning bikes in favor of scooters. The biggest thing holding it back remains the unchanged price, with per-minute rates adding up on the kinds of long rides this new bike begs for and the $1 unlock fee limiting its use for short errands.

At this point, the shared e-bike design is mostly figured out. The previous model of red JUMP bikes demonstrated the benefits of a strong, durable bike over lower-cost models that more quickly fell into disrepair under outdoor conditions and heavy use. Lime acquired the Uber-owned JUMP in spring 2020 as Uber invested in Lime in lieu of running its own bike share service. The new Gen4 bikes adopt the standard white, black and green of Lime’s scooters. The bikes are a mashup of an improved JUMP bike design that takes the same battery as Lime’s Gen4 scooters, which should make it easier to service Lime’s mixed fleet.

The biggest advancement of the new model is its ease of use. Like the scooters, the bikes are locked and unlocked using the app. They no longer have the awkward retractable cable lock like the JUMP bikes did. The bikes also auto-shift, so there is no gear shifter. People can just hop on and ride as though it is a simple single-speed bike, though one that can easily climb steep hills and maintain 15 mph on flat ground, its top assisted speed under Seattle’s bike share regulations. Though there is a lot of tech and design enabling such simple operation, it’s well-hidden from view. The brakes are strong drum brakes encased within the front and rear hubs. The cables, motor and wiring for the lights are all hidden within the frame and hub. For someone who has never ridden an e-bike before, it may feel like this bike is magic.

Of course, the true test of any bike share model is longevity under harsh outdoor conditions and vandalism. We will have to wait and see.

Still, the thing that holds this service back is the price, which has not changed very much for a quite a while and could use some updating. It’s $1 to unlock plus 36¢ per minute (plus tax). The $1 to unlock pricing scheme dates back to very beginning of this whole private bike share thing, back when bikes were pedal-only and cost a mere $1 for 30 minutes. But as the electrified services added a per-minute price, the $1 unlock fee is feeling more and more outdated. Why are we hanging onto this relic of a bike share era that is long over?

The $1 unlock fee limits the convenience of chaining together short trips, like running errands, because it’s hard to justify the cost just to go a handful of blocks. The $1 fee also limits one of Lime’s biggest advantages: Their mix of scooters and bikes. I personally prefer the bikes, but often only a scooter is nearby. I would be far more likely to seek out a Lime scooter if I knew I could swap it out for a bike if I passed one. But paying an extra $1 doesn’t make sense, so I don’t ever do it. Most likely, I’ll just walk or catch a bus instead. All of the other scooter and bike services in town charge the $1 unlock fee as well. I think it’s time for a company to shake up the market. Ditching the $1 would also simplify the pricing structure, making it easier to explain and advertise to potential riders. Pay while you ride, plain and simple.

And while I understand that this is the way the so-called micromobility industry works now, it is a bummer that long trips get so expensive. These are companies, not charities, and I’m not sure even these prices are very profitable. At one point, app taxi services like Lyft and Uber were competitive with micromobility for many trips, though recent increases in app taxi prices make bikes and scooters a fair bit cheaper as they should be. But still, it would cost something like $17 to bike from Ballard to downtown Seattle, and then another $17 to come back. That might make sense on a special occasion, but not as a regular thing to do. Obviously, the thing to do is to bike to an express bus like RapidRide. But sometimes you just want to bike. I don’t really have a solution here. I guess I’m just lamenting that things cost money. If you want to ride longer distances regularly, you’re definitely best off getting your own bike (stay tuned because I’m working on something of a bike-buying guide for Seattle).

UPDATE: I should have mentioned that Lime does now sell passes in addition to the regular rate. So if you know in advance you’ll be riding a lot, you can save some money:

Have you tried the new Lime Gen4? Share your thoughts below.

10 Responses to Lime’s newest model is the best shared bike yet + Is it time to ditch the $1 unlock?