EDITOR’S NOTE: With Bike Everywhere Day a week away, Seattle Neighborhood Greenways has some ideas for how you can get engaged to help get the downtown Basic Bike Network back on track. If nothing else, scroll to the bottom to see their action items. This is a cross-post from their blog. 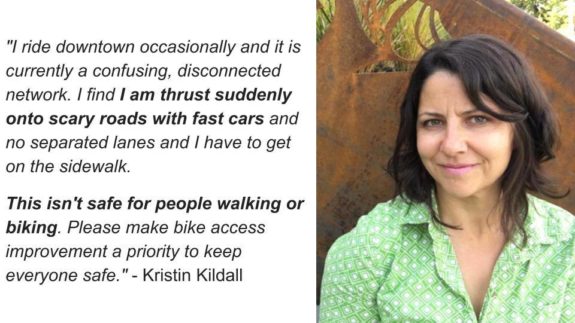 May is National Bike Month. A month when everyone is encouraged to dust off their bike, pump up their tires and try biking to get to work, school, local businesses, or just for fun. Everyone who wants to bike should be able to because biking can make us happier, keep us healthier, save us money, and reduce pollution.

But right now, too many people find biking to where they want to go scary or uncomfortable. In fact, a lack of safe streets is the number one reason people in Seattle don’t bike more.

It doesn’t have to be this way.

Way more people bike in cities that have safe, comfortable, and convenient bike networks. Around the world, cities like Vancouver, Calgary, New York and London have all implemented connected bike networks and seen ridership exploded. Even here in Seattle, when the 2nd Ave protected bike lanes were connected to Pike and Pine, ridership jumped 30% on 2nd Ave. But we still have a long way to go in Seattle.

That’s why we created a vision of a bike network that connects all neighborhoods, starting with our fastest growing “Urban Villages.” 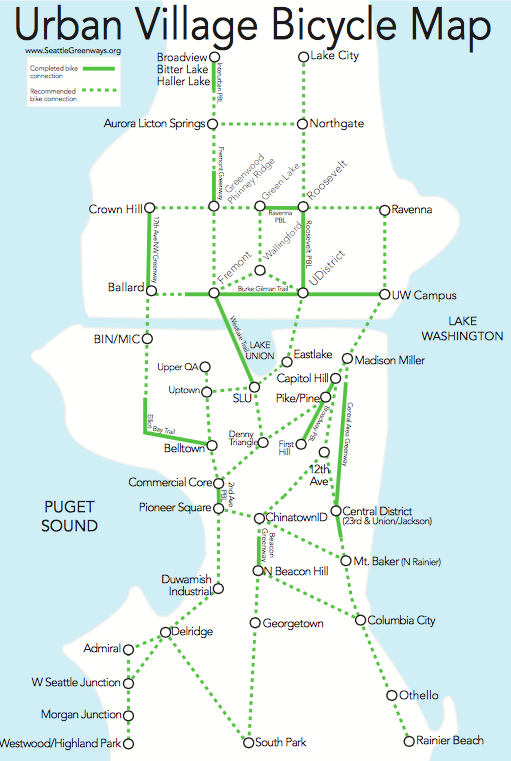 And collaborating with Cascade Bicycle Club, we also created a plan for a “Basic Bike Network” for downtown Seattle. 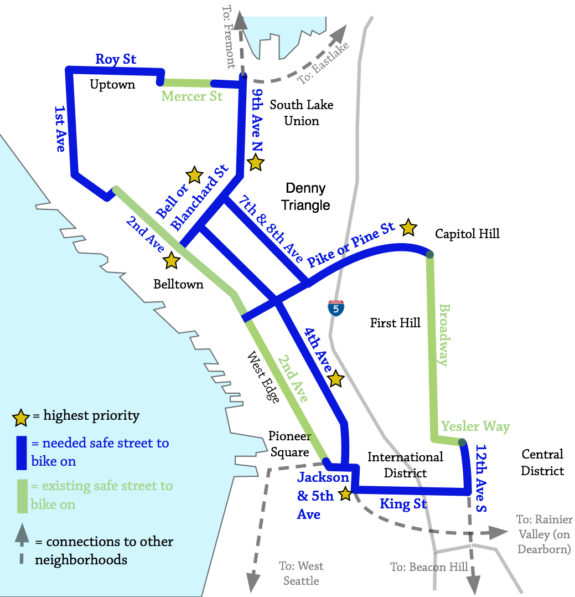 Unfortunately, in 2016, former Mayor Ed Murray put the Basic Bike Network on hold until after a new transportation plan for downtown Seattle called One Center City could be developed.

We pushed back against these delays. Led by family bikers, we filled City Hall holding signs saying “My Family Bikes” and “Safe Streets Now,” chanting “We can’t wait!” As a result of these protests, the city promised to build parts of bike lanes on 2nd Ave and Pike/Pine and include bike routes in the One Center City planning process. 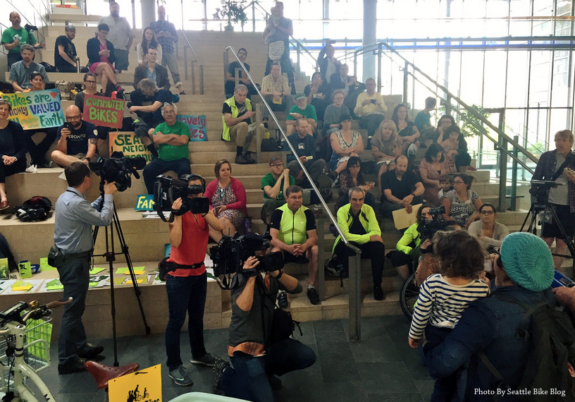 The two-year One Center City (OCC) collaborative planning process resulted in a plan for downtown that safely moved more people. The planning process was organized by a working group made up of government, agency, and dozens of community stakeholders. Last fall, after years of study, analysis, and compromise, the committee approved a holistic plan that would keep everyone moving downtown. The plan included new bike and bus lanes that would increase safety (decreasing collisions by seven to 18 percent), move more people with more efficiency (10,000 more people per hour), and reduce travel times for everyone (30 seconds to one minute compared to the no-action alternative). Additionally, the city’s analysis showed that the Basic Bike Network was a key part of the solution, because by building it the number of people biking downtown would double by 2023. 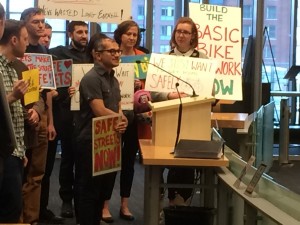 But when the new Durkan administration came to power, they pushed aside the One Center City community stakeholder committee, ditched the compromise, delayed the bike lanes, and watered down the transit improvements. So we rallied caring community members who were fed up with all the delays and sent hundreds of emails to elected leaders and testified at City Council meetings.

While we haven’t won yet, our elected leaders are listening now. Help us keep the momentum going.

Here are three quick things you can can do during Bike Month to make the Basic Bike Network a reality:

Bonus action: Become a monthly donor. Seattle Neighborhood Greenways is a 501(c)3 and we depend on your financial support to make every neighborhood a great place to walk, bike, and live.

11 Responses to Seattle Neighborhood Greenways: Save the Basic Bike Network