ofo kicks off 2018 with free rides, big plans and an allegation of poor working conditions 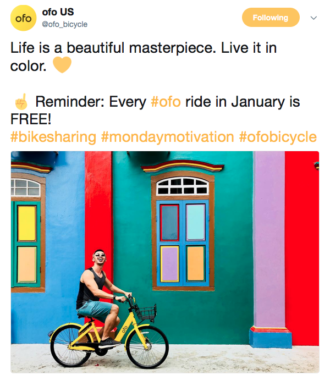 2017 was a wild year of expansion and change for the global bike share industry, and 2018 is already shaping up to continue the trend of innovation and competition within the industry. And Seattle is positioned to remain at the forefront among U.S. cities as city staff work on a permanent permit and regulation scheme for the private bike share services.

ofo, the Beijing-based giant that reported more than $1.1 billion in investments in 2017 alone, has kicked off the year with a serious challenge to competitors Spin and LimeBike: Free rides for the entire month of January. LimeBike launched a “bonus bike” feature, where rides on certain bikes specially marked in this app are free indefinitely. The company also announced that all rides through January 14 are free. Spin, meanwhile, announced that it has an electric-assist bike it is preparing to launch in some markets (not Seattle yet).

“We have large plans ahead for Seattle,” said the new ofo US Head of Communications Taylor Bennett. Bennett previously worked for Uber and, most recently, Pandora. Seattle Bike Blog spoke with Bennett recently to get caught up on what’s happening at the company behind all those yellow bikes around town.

“We’ve seen a really strong reception for dockless bike share across the country, but especially in Seattle,” he said. The company is currently at its permit-restricted limit of 4,000 bikes. “We look forward to working with Council to expand that.”

The company is also looking to expand beyond the Seattle city limits to serve cities all across the region. Bellevue has already been openly exploring their bike share options, and the recent opening of the 520 Bridge Trail definitely makes connecting the two cities by bike far easier.

Bennett said making sure bikes are parked responsibly and that poorly parked or toppled bikes are handled quickly are key challenges going forward. The company has some ideas for making things work better, such as incentivizing riders to park in certain spots via geolocation.

Speaking of bike location data, Bennett said the company does not share or sell user data beyond the anonymized data the city requires as part of its permit.

“At this stage, it’s really used for city planning,” he said.

ofo utilizes the Millionair Club Charity — a 97-year-old Seattle charity institution — to hire its daily labor needs, including bike distribution and pick-up. MCC runs “a supportive employment program that specializes in helping people who are experiencing homelessness or other barriers to employment to become job ready,” according to their website. They help people find whatever level of employment meets their goals, whether that’s a path to a long-term career or a short-term job to make some cash now.

Potential employers put in work orders, and MCC staff find people who would be a good fit and help them get ready. That could mean supplying necessary clothing or a shower. It could also mean helping people get any required certificates or permits, such as a food handler’s permit. Workers are paid at least minimum wage and get bus tickets to and from their job sites. MCC works with about 1,100 employers.

On any given day, between 10 and 20 people may be hired through MCC to work for ofo, depending on the demands of the day. Those are hours of work and pay going to some of the people in Seattle who need it most. 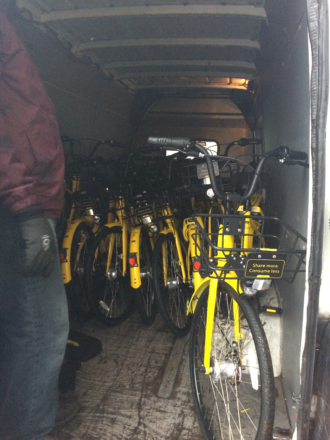 Photo of the back of an ofo van, courtesy of Nikolai Mell. Mell claims workers sometime have to sit unsecured in the back with the bikes.

But one worker, Nikolai Mell, sounded the alarm in a Reddit post over the weekend alleging a series of workplace problems. The most serious claim may be that workers often need to ride in the back of work vans without seats or proper safety restraints. If true, that would be both unsafe and possibly illegal.

“It is a miracle that someone isn’t dead already,” Mell told Seattle Bike Blog.

Mell also said there is no official break system, and often workers have no access to a bathroom. He sent us a list of demands (PDF) he said he wrote along with two other current or former workers at ofo. Demands include safe equipment, job transparency, and a living wage.

It is unclear how many other ofo workers share Mell’s grievances.

The Millionair Club’s Communications Manager Kjerstin Wood said they are gathering information about the allegations, but do not have a comment about whether they are true. From an emailed statement:

Millionair Club Charity staff learned of the concerns posted online mid-morning Sunday, January 7, which we take very seriously. Safety and respect for our workers is a top priority. We are currently gathering information as quickly as possible so that we can address these concerns.

Individuals in MCC’s employment program have access to information regarding Office of Labor Standards ordinances and regulations, on-the-job safety and resources should they have a concern about wages, safety or any working conditions.

UPDATE 1/10: Wood says MCC will be sending an OSHA-certified staffer to conduct a safety audit of the ofo contract to “see what the conditions are like and make sure it meets the safety standards.” Wood says the organization conducts such audits “with all our new employment contracts,” and did not say whether they have yet found issues with the ofo contract.

Bennett at ofo also did not address these allegations directly:

There’s nothing more important than our ofo family and ensuring those we work with feel safe, respected and valued. As ofo’s first city in the US, Seattle is a special place to us, and we’re proud of our partnership with the City, the work opportunities we’ve created, and our commitment to give back in every community we serve.

6 Responses to ofo kicks off 2018 with free rides, big plans and an allegation of poor working conditions