See our Seattle Bike Share Guide for an updated FAQ about bike share in Seattle as well as links to download active companies’ apps and a guide to properly parking your bike share bike.

The bike share cap has increased again. As of today, the city’s pilot permit allows companies to operate 2,000 bikes on Seattle streets, double the current level.

None of the companies have yet announced a surge in new bikes like when they first launched, though all have said they will continue working toward the city’s caps. The effect it that every day, bike share in Seattle gets just a little bit more useful.

In another month, the caps on bike share companies will be lifted entirely. But so far none of the companies seem eager to increase the bikes on the ground too suddenly.

LimeBike won’t be adding new bikes for another week or so, Seattle General Manager Dan Stone said. The company is about a week away from launching their updated bike, which includes a slightly updated look and clearer instructions on how to ride safety and park their bikes correctly: 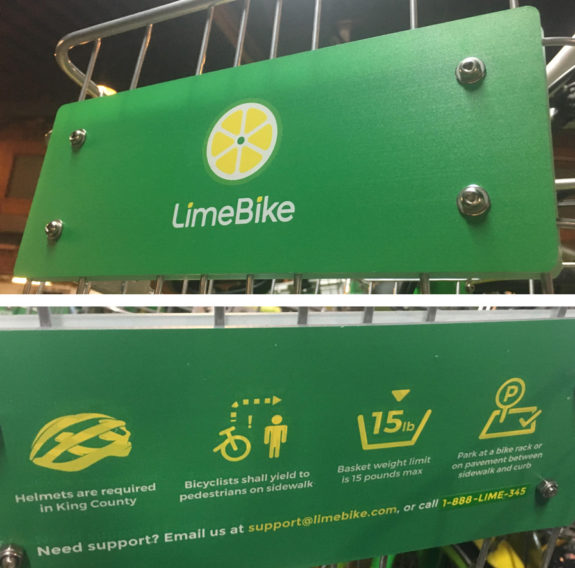 Photos of the updated on-bike signage from LimeBike.

Perhaps the new LimeBikes will also come with a taller seat post, the complaint that continues to dog the company’s otherwise high-quality bikes. The company has said taller seat posts are on the way.

All three companies are busy launching systems in other cities around the nation.

Spin has launched in a couple Silicon Valley cities and Dallas. They have also been actively working to get into New York City, starting with parts of the city not served by CitiBike (like Rockaway Beach). So far, they have been rebuffed by city officials, but CitiBike (the premiere system owned by Pronto’s former operator Motivate) is clearly trying to prepare for the arrival of free-floating bike share by announcing their own free-floating bike to augment their huge and popular dock-based system. That’s a smart move (BCycle, another established dock-based bike share company in the U.S., has also announced a free-floating bike).

Both Spin and LimeBike are planning launches in Washington, D.C., which could become the first major market where free-floating bike share companies compete directly with an established and popular dock-based system: Capital Bikeshare. That will be fascinating to watch.

ofo, meanwhile, is preparing to launch in Worchester, Mass., next week. That will give the global bike share giant a city on both coasts of the U.S.

International news sources are paying attention to what’s happening in Seattle. The Washington Post’s Beijing Bureau wrote a front-page story about China-based ofo’s venture into the U.S., featuring this quote from yours truly:

In Seattle, there are now 3,000 dollar-a-ride dockless bikes on the streets, and usage has crushed the old docking-station-based project, says Tom Fucoloro, editor of the Seattle Bike Blog. Nor have fears of chaos been realized.

“Everyone’s scared to death of these piles of bikes. I find that kind of funny — too many bicycles would be an amazing problem for a U.S. city to have,” he said.

“Almost all the bikes are parked out of the way, more or less properly, and if they aren’t, someone will just come and move them out of the way. Seattle’s kind of a rule-following town in that way and that’s playing out with the bikes.”

The keyword in that quote was “almost.”

CNN Tech wrote a story focused on Seattle’s incredible bike share 180 with the headline “How Seattle morphed from bikeshare failure to industry leader in five months.” Again, yours truly:

“The city has turned what was an abysmal failure into a huge success story just within a matter of months,” Tom Fucoloro, editor of the Seattle Bike Blog, told CNN. “Seattle is the gateway to the U.S. on bikeshare. A lot of other cities are looking at Seattle and watching.”

PRI’s The World came to Seattle to report on what’s happening here: “Seattle becomes first US city to try dockless bike sharing, the system that’s transforming China.” Again, yours truly with the quote:

“We’re about to see a real transportation revolution in this city,” said Fucoloro. “Huge, huge increase in the number of trips being taken by bicycle.”

KUOW does not run The World anymore, but my college roommate in Chicago heard it and sent me this text:

Of course, it hasn’t been all rainbows and roses. The New York Times published a story with a truly bizarre angle on the incredible bike share boom in China: “As Bike-Sharing Brings Out Bad Manners, China Asks, What’s Wrong With Us?” According to that report, the bike share innovation is either a “monster-revealing mirror” or a proud invention on par with their “ancient inventions of gunpowder, paper, printing and the compass.” That’s quite an either/or.

I have had people who work for cities around the country (and a few outside the U.S.) get in touch to chat about free-floating bike share in Seattle. I’ve also had venture capital investors call to ask about how its going. That’s not a normal thing for me. The city has tapped into something big.

More locally, I highly recommend reading Sara Bernard’s story for the Seattle Weekly: “Why the New Bike Shares Could Actually Make Seattle Streets Safer.” Sara set out in part to ask the helmet question that so many others in the local media have asked about bike share, but her research took her in a much more nuanced direction. If only all reporters put in this kind of work. Yours truly:

“Ford and GM, they lobbied the country hard to build a freeway system; they saw that as the biggest limit to selling cars: People didn’t have a place to drive,” Fucoloro says. “Now it’s like the weird capitalist reversal of that same power: [Bike-share companies] need the city to make streets safer.”