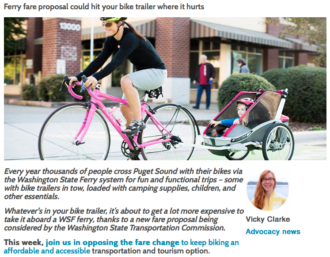 Screenshot from the Cascade blog.

For the Bainbridge and Bremerton runs, for example, a person biking with a trailer would have to pay $16 during peak season, a 73 percent increase over the current passenger plus bike fare of $9.20, Cascade Bicycle Club’s Vicky Clarke wrote in a blog post. The $16.10 fare would be almost the same as driving a car onto the ferry ($18.20). The costs on the San Juan routes could add up even more because a person with a trailer would have to pay $6.40 – $7.95 for each inter-island ferry ride, which is currently free if you bike.

The way the proposed rule change is worded (PDF), any bicycle trailer (even a little trailer used to pull a child) would be classified the same as a motorcycle or car trailer (“stowage”). So hauling a kid or some camping gear in a bicycle trailer will add as much to your fare as towing an ATV in a trailer behind your car or truck.

“The proposed bike trailer reclassification boils down to an unprecedented fare increase on a small number of ferry users,” wrote Clarke. “It’s a change that will impact a few people greatly – like families with small children, bike tourists and people who use a bicycle as their sole mode of travel –  while generating a negligible revenue increase to the system.”

Cascade is urging people to comment on the proposed changes by the end of the day Friday. They even created a handy online form you can use.

On top of just the cost issue, there’s also a time issue. For the Bainbridge and Bremerton routes, for example, people with bikes and an ORCA card can just beep their cards in Seattle and skip the payment booths. It doesn’t seem fair that someone hauling their kid in a trailer would have to wait in the car line to pay their higher fare while people without kids can just bike through.

Families trying to bike onto ferries are part of the solution to overcrowded ferries and hours-long wait times. They should be encouraged, not punished.

Next Wednesday (July 26) the Washington State Transportation Commission (WSTC) – the committee that sets state ferry fares – will approve new rates. While ferry fare increases are pretty routine, and are usually around 1-3% every two years, the proposal before the WSTC this year includes a “reclassification” of bikes with trailers that will result in most summer season bike-trailer trips costing 1.5 times the current cost! The Commission is receiving public comment through Friday.

The proposed bike trailer reclassification boils down to an unprecedented fare increase on a small number of ferry users. It’s a change that will impact a few people greatly – like families with small children, bike tourists and people who use a bicycle as their sole mode of travel –  while generating a negligible revenue increase to the system.

Functionally, a reclassification would mean that rolling from Seattle to Fay Bainbridge Park for an overnight camping trip, or touring the San Juan’s by bike is about to cost a whole lot more. We’ve done the math on these routes, and the current and future proposed costs are below.

Cascade is asking the Washington State Transportation Commission not to approve this reclassification, and to keep fares affordable for people who bike. Will you join us in telling the WSTC that people who bike do not support this fare increase?

We have through Friday to email the WSTC and comment on the new ferry fare proposals, especially the one that will disproportionately impact people who bike. If you want to get into the nitty-gritty of the proposal, you can also visit the WSTC website (WSTC.wa.gov).