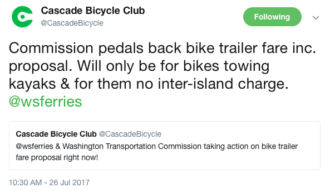 The WA Transportation Commission will instead limit the new rules to people hauling kayaks or canoes on a bike trailer. So people hauling kids in Burly trailers or pulling their camping gear will still be charged the normal bike fare.

But it gets even better. Debbie Young, a commissioner from San Juan County, also pushed to exempt people pulling kayaks and canoes from having to pay each time they use the inter-island ferry. People walking and biking can island hop for free, so paying for each trip would be a big increase in costs for the relatively few people who haul kayaks on their bikes.

Young also requested a study of how many people are bringing trailers onto the ferries and how they are currently being stowed. The fare increase was proposed without any real data about how much deck space was being occupied by bike trailers that could have been used for other paying vehicles. Even big bike trailers are usually off to the side in the bike area, not in the car deck space.

The Commission received 800 comments on their proposed list of changes, with the vast majority coming from people concerned about the bike trailer fares.

“They literally pointed to these binders that were full of comments,” said Cascade Bicycle Club’s Vicky Clarke. 550 of those comments came through the Cascade online action alert.

So this is great news, and a quick turnaround on a rule that could have had a particularly big impact on families biking on ferries. People biking to ferry routes instead of driving are part of the solution to crowded routes, and the agency should be focused on how to encourage more people to bike instead of trying to find ways to charge some small percentage of them a little more money.

There are still some big questions about how the few people hauling kayaks and canoes will be processed before boarding. Different ferry terminals operate differently, but many have designated bike routes that lead to bike holding areas. People with kayaks or canoes will have to somehow know to get into the car line and go through the booth while headed in both directions (return trips on most routes are free if you bike, since your initial fare counts as a round trip). Often the car booths are fed by state highways that are not bike-friendly, and in busy times can have hours-long waits that people biking can skip. Will they be posting a bunch of new signs targeting the very few people hauling kayaks on bicycles? Or will staff have to track them down in the bike area and tell them to bike back up the hill and wait in car traffic however long it takes in order to pay the additional fare?

I can’t see how it makes sense to go through this much trouble to charge such a small number of people some extra money. The total revenue generated can’t be very high (Ferries does not have data on this, which is another red flag), but it will certainly lead to headaches for both staff and riders. And all of this is to charge a handful of adventurous people hauling one people-powered device on the back of another one? I just don’t get how this can be a priority for WA Ferries right now.

The agency would probably make more money by instead using the image of happy adventurers hauling kayaks behind their bikes as part of a marketing campaign to sell WA Ferries as a gateway to outdoor fun. Because they are!

This narrowly-avoided rule change that could have targeted biking families is also an outreach lesson for WA Ferries and the Transportation Commission. Clarke said she hopes the agency and commission will “engage the bike community meaningfully when Washington Ferries is considering or shaping a fare policy that might impact people who bike.” It shouldn’t take a last-minute SOS action alert from Cascade to avoid a mistake like this.