Proposed layout for a stretch of Avalon Way, from SDOT. See full proposal below. 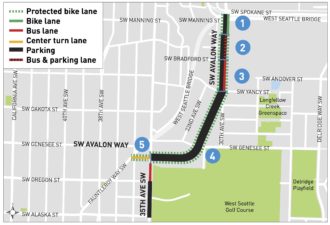 There are only so many ways to get up West Seattle’s formidable hills, and SW Avalon Way is an absolutely vital one.

Connecting the Alki Trail/West Seattle Bridge to Fauntleroy and the heart of West Seattle, Avalon is one of the neighborhood’s most important bike routes. It already has old, paint-only bike lanes in spots, but much of the route requires mixing with car traffic on intimidating stretches of hill.

With a paving project coming up in 2019, the city is planning to make the street safer for all users, including protected bike lanes and safer crosswalks.

SDOT is hosting an open house 5:30 p.m. – 7 p.m. today (Tuesday) at Delridge Community Center. If you can’t make it (sorry for the late notice!), you should comment via the project’s online open house.

Protected bike lanes don’t get rid of hills, but they do lessen the rush and stress. Hills are less of a barrier when you can take your time and go whatever speed you need to go. Many people don’t want to bomb down hills, which is what Avalon’s mixed traffic lanes today essentially forces people to do.

The city’s proposal would add protected bike lanes in both directions of Avalon from its connection to the Alki Trail under the West Seattle Bridge all the way to Fauntleroy Way. These will be much more welcoming to many more people, and could have a big impact on the biking rates through the whole neighborhood (more details in the open house boards PDF): 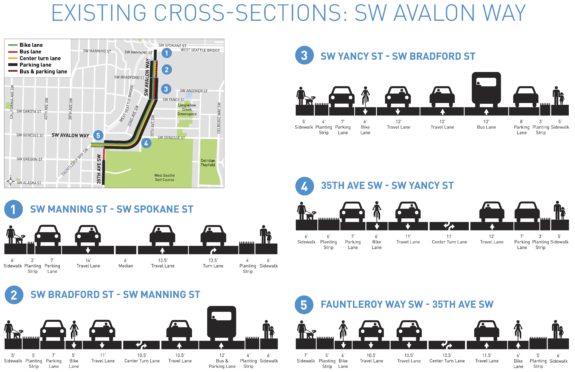 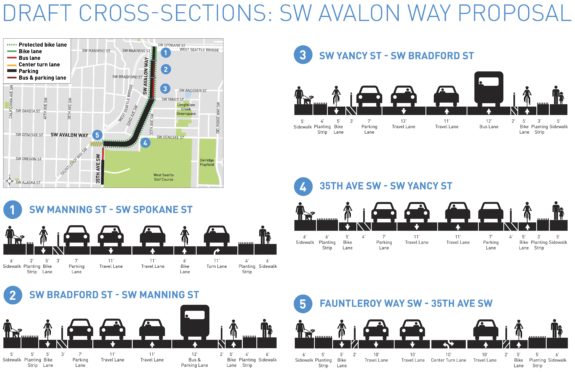 Fauntleroy itself is also due for major improvements, which will tie into the new Avalon bike lanes. The Fauntleroy Boulevard project will build protected bike lanes and a new planted median between 35th Ave SW and SW Alaska Street. The city is currently seeking feedback on a proposal to cut out a section of the median (tell them what you think here).

These two projects will support each other and take a huge step closer to a complete, safe and comfortable bike network in West Seattle.