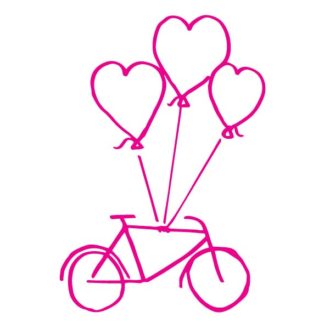 You can send this adorable drawing to city leaders asking them to complete the Missing Link.

That’s the text on the adorable valentines Cascade Bicycle Club is urging supporters of the Burke-Gilman Trail to send to city leaders. It is much more friendly than my first attempt at a Missing Link valentine.*

Cascade staff (including my wonderful spouse who, full disclosure, works for Cascade) were also at the Ballard Farmers Market Sunday helping people send physical versions of the valentines urging the Mayor, SDOT and City Council leaders to choose the Shilshole South route and get to work building it.

The timing is important because SDOT is presenting the options to the City Council noon Wednesday, and as we reported in January the choice of an official preferred alternative is imminent.

“Let’s finish this and move on. We have other things to finish,” said City Council Transportation Committee Chair Mike O’Brien to a room full of people gathered at the Elks Lodge in late January to support the trail. He wants to see ground break this year.

Jessica Dickinson, who crashed on the Missing Link and seriously injured her wrist, told her story of dealing with chronic pain and being afraid to bike in Ballard ever since.

“I wonder who will be next,” Dickinson said after telling her story. And she is right to wonder. Nearly two people are hospitalized by Missing Link crashes every month that the trail remains unfinished. Many more are injured, just not badly enough to be hauled away in an ambulance. The status quo is beyond unacceptable.

A megastudy released last summer looked at four options for the trail, which we explored in detail previously. Two of those options meet the basic goals of the project, but one is by far the most popular: Shilshole South. More than 90 percent of the immense amount of public feedback received was in favor of the South route, which also happens to be the basic rail-adjacent alignment the city has been trying to build since the City Council approved the project in 2003.

Well, public opinion seems to have coalesced around the South option even further, and it extends well beyond the biking groups like Cascade that have been working for so long to get the project completed. The packed meeting at the Elks Lodge was organized by Mark Durall at the Olympic Athletic Club and included some major property owners as well as organizers of the Ballard Farmers Market.

For a public debate, this is about as close to unanimous as you’re ever going to get.

The crowd at a late January meeting of Shilshole South supporters 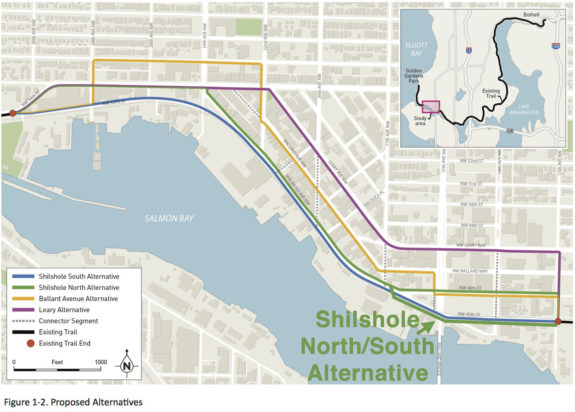 The options from the Draft EIS. I modified it to show a possible combination of the North and South options.

The only other option that deserves a seat at the table is the Shilshole North option. As we wrote in June, “It’s not awful, but it’s also not better than the south option.”  This is still true even if you improve the east end of the route by crossing the street and following the Shilshole South route along NW 45th Street (I modified the map above to show this concept). Access to downtown Ballard could be a bit better since nearly every intersection along Shilshole could use a safety redesign that the trail project could provide. And Market Street could definitely use safety improvements between the Locks and 24th Ave NW. But these benefits come at the cost of more street, driveway and loading dock crossings that could add conflict points and traffic signal waits. It is also a little longer, has an extra hill climb up to Market St and creates difficult pinch points at the Locks and at the busy Market/24th Ave NW intersection.

The option also opens the project to all new trail pushback since it would pass in front of many more businesses and follow a route the past couple decades of public debate have not explored in depth. And since the draft megastudy was released in June, the North option has not gathered many if any enthusiastic supporters.

But the kicker for me is that the North route would skip the section near the industrial Salmon Bay waterfront, which has the potential to be among the coolest parts of the whole Burke-Gilman Trail. The conflicts with industry driveways has been a sticking point in the debate, so maybe we’ve lost sight of how big an asset the trail could be for these companies. By bringing people closer to their unique businesses, the trail is a chance for them to tell their stories and become the icons of Ballard they could be.

Kevin Carrabine, who has been advocating for the Missing Link since 1999 as part of the Friends of the Burke-Gilman Trail, made a great comparison recently between Ballard and Vancouver’s Granville Island. A major tourist destination and industrial community, Granville Island is packed with visitors on foot and bike. Yet the tiny island is also home to a major concrete plant much like Salmon Bay Sand and Gravel, a Ballard Missing Link opponent.

But Ocean Concrete has embraced their unique role as part of Granville, investing in iconic art and even hosting a popular community open house every year. As a result, they are a beloved part of the island and part of what makes Granville so cool. If the community works together, industry, tourism and the arts can all coexist and thrive. Here’s one of Ocean Concrete’s promo videos about it:

The Ballard Missing Link saga can have a happy ending. The people have been calling for it for a long time, and their voices are only getting louder. Mayor Murray, let’s end this debate and get to work.

* Cascade’s valentine is much more tactful than my proposed draft: “?Roses are red, violets are blue. OMG just build this damn trail so we can all move on to other big problems in our city and across our nation because when you have more than 90 percent of people agreeing about whether and where to put a biking and walking trail maybe we can just declare that debate over and get to work building it or have we created a Missing Link Industrial Complex in which endless public meetings and engineering studies and legal battles and hospital visits consume so much funding that the debate itself has become existentially required to persist in perpetuity until every last one of us has broken some kind of bone crashing on those fucking train tracks, because if the City Council’s original decision to build the trail were a baby that baby is about to enter high school and along with all the real babies born in 2003 would not have a safe way to bike to Ballard because this trail still is not complete and that is a fucking embarrassment because this is a biking and walking trail we’re talking about not a nuclear power plant or the Large Hadron Collider and if we can’t manage to finish this one-mile-and-change trail now then how am I possibly going to have hope that we as a city and as a people have any chance in hell of accomplishing any of the much larger tasks ahead of us because my generation is being handed the enormous task of somehow handing the next generation a planet they can still live on and the fact that we can’t even build this fucking trail is not helping my cynical sense of hopelessness that the inertia of the status quo is just too powerful a force to overcome no matter how hard we try, so sugar is sweet, blessings from the Hallmark Corporation, build the fucking trail, valentine. ?“

19 Responses to Opinion on Missing Link route coalesces even further + send City Hall a Valentine to say: Build it!