CM O’Brien urges the Mayor, SDOT to make a choice on the Missing Link 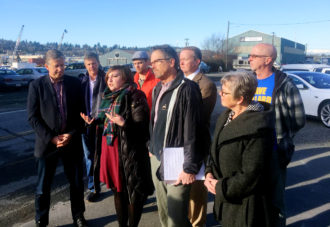 Jessica Dickinson tells her story of breaking her arm in two places in a 2014 crash on the Missing Link. She still experiences pain.

Councilmember Mike O’Brien joined neighbors and representatives from nearby businesses Friday to urge SDOT and Mayor Ed Murray to make a decision about their preferred option for the Burke-Gilman Trail Missing Link in Ballard.

“I believe if the city prioritized this as they should … we could have have it begin construction by fall and have it open by the time the weather turns nice in 2018,” O’Brien said.

SDOT’s Environmental Manager Mark Mazzola said the city is hoping to have a preferred alternative “within the next several weeks” and a final environmental study out in May. Here’s the full statement sent via email:

SDOT’s goal is to decide upon a preferred alternative within the next several weeks.  This will allow SDOT to complete our Final EIS (Environmental Impact Statement) in May. Since the end of the public comment period we have been developing responses to the approximately 4,100 public comments we received and conducting additional field studies and analysis prompted by those comments. Depending on the complexity of the alignment ultimately chosen, such as for intersection crossings and utility relocations, design can take up to a year before construction begins.

The comment period ended five months ago on a draft environmental impact statement studying all the possible options and impacts for the trail connection. Support is overwhelmingly in favor the Shilshole South option, which follows the rail line like the rest of the trail. The longer the city delays making a choice and finishing design work, the more people will continue getting injured or worse.

At the press event Friday, Jessica Dickinson joined Councilmember O’Brien to tell her story of crashing on the train tracks in the middle of the Missing Link back in August 2014. Her wrist was badly broken, resulting in multiple surgeries.

“I’ve dealt with chronic pain for two years,” she said. The ongoing care has cost her thousands of dollars out of her own pocket.

But beyond that, the experience was traumatic. She has only bikes in the area once since the crash.

“I had to walk my bike across the tracks,” she said.

Jessica is just one of the nearly two dozen people who go to the hospital every year due to crashes where the trail remains incomplete decades after planning started. Many more people than that are injured, but are not counted because they were not hauled away in an ambulance.

The sooner the city makes a decision, the sooner we can stop the carnage.

5 Responses to CM O’Brien urges the Mayor, SDOT to make a choice on the Missing Link