SDOT installs truck safety sideguards + What would it take to get them on every truck? 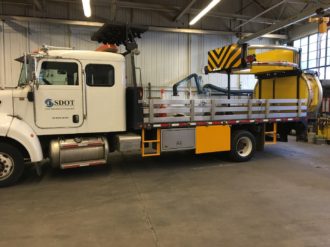 Seattle’s Department of Transportation is retrofitting all department trucks to include sideguards designed to reduce harm to people walking and biking in the case of a collision.

One of the biggest dangers for people around large trucks is not the initial collision, but the likelihood that someone will be knocked to the ground, then run over by the rear wheels. The sideguards are a very simple way to help push people out of the way of the wheels in the case of a collision. People may still be injured, but the seriousness of those injuries and the likelihood of death would be significantly reduced.

A study out of the U.K. found that “fatalities from side-impact collisions with trucks were reduced by 61% for cyclists, and 20% for pedestrians, after sideguards were added,” according to SDOT. That’s not zero, but it’s a big improvement. This is an easy way to work that much closer to Vision Zero.

Sadly, a terrible collision in Portland this morning highlights why sideguards are so needed: A man biking was killed in a collision with someone driving a box truck without sideguards. While details are very early, Bike Portland reports from the scene that the man’s bike was lodged near the rear wheels, likely due to a right hook collision. Our condolences to the man’s friends and family.

The SDOT action follows a similar decision by the University of Washington in Spring 2015, which added sideguards to all campus trucks.

Obviously, the first goal should be to prevent a collision in the first place, but sideguards are an extremely easy way to reduce harm when collisions happen.

New York City and Boston have also required the guards on city vehicles for years now, and Boston estimates that the cost to install the guards is only $1,800, a small percentage of the cost of a large truck. Boston goes an extra step by also requiring sideguards on trucks used by contractors the city hires, which is one step Seattle could take immediately.

UPDATE 2/7: NBC News posted a very timely report today about a national effort to require truck sideguards. The effort is mostly focused on the safety of people driving, of whom about 200 die each year after crashing into the side of unguarded trucks. There’s even an online petition you can sign. So the issue is not just about biking and walking safety. (h/t Bike Portland)

While it’s great that SDOT is working to set an example, what will it take to get sideguards on all large trucks operating in the city/county/state? Could the King County Board of Health require them the way they require adults to wear bicycle helmets? It makes more sense to require safety equipment on dangerous machinery operating in public than on possible victims.

Due to the interstate nature of trucking, a comprehensive solution would need to be national, though maybe a couple big states passing such laws would be enough to set the standard. Perhaps insurance companies could start calculating sideguards into their premiums for commercial trucks, which only makes sense considering the harm (and, therefore, payout) reduction sideguards could provide. That may get nationwide results faster than waiting for a Federal regulation.

More details on the SDOT effort, via the SDOT Blog:

SDOT is committed to making our streets safer for everyone, and we’re taking a big step by retrofitting all SDOT trucks with sideguards.

Sideguards reduce the risk of serious injury or death by preventing pedestrians, bicyclists, and motorcycles from being caught underneath a large truck. According a study in the U.K., fatalities from side-impact collisions with trucks were reduced by 61% for cyclists, and 20% for pedestrians, after sideguards were added.

Sideguards can also help save on gas by reducing air drag an increasing fuel efficiency.

In addition to retrofitting all existing large trucks, SDOT is requiring all new large trucks be equipped with sideguards straight from the manufacturer.

To learn more about side guards, and how they help save lives and fuel, check out the U.S. Department of Transportation information page.

Founder and Editor of Seattle Bike Blog.
View all posts by Tom Fucoloro →
This entry was posted in news and tagged sdot. Bookmark the permalink.

7 Responses to SDOT installs truck safety sideguards + What would it take to get them on every truck?