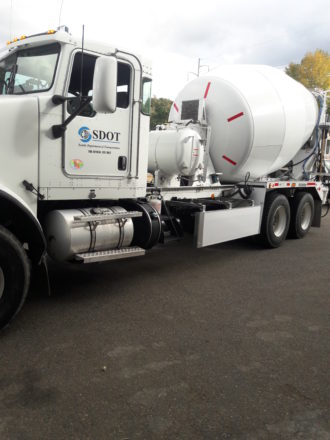 Trucks are big, make wide turns and have nasty blind spots. So while they are vital for making the city function, they can also be very dangerous for people walking and biking.

In a recent five-year period, USDOT found that at least 556 people walking and biking were killed in collisions specifically with the sides of trucks. What makes side impacts particularly dangerous is that they can easily become fatal or very serious even at low speeds because the high point of contact on the truck or trailer can easily knock people down, putting them in the path of truck wheels. It’s a nightmare scenario that is sadly far too common.

While one vital part of the solution is safe street design, there is another surprisingly easy step that has been proven to dramatically reduce the seriousness of these side-impact collisions with trucks: Side guards. By attaching a guard that runs along any gaps in the side of the truck or trailer body, anyone hit has a better chance of being pushed out of the way of the following wheels. The impact can still be bad, of course, but the odds of survival are much higher. A study in the UK found that such side guards reduced fatalities by 61 percent for people biking and 20 percent for people walking, according to USDOT.

We have reported on side guard before. UW installed them on campus vehicles a few years ago, for example. Other cities, like Boston, have even required side guards on all trucks operated by companies that contract with the city. We have argued that Seattle should pursue a similar rule.

But first, SDOT needs to get its own house in order. And they are. The department has started installing side guards on its fleet of trucks. And what’s even better: The guards are manufactured right here at Allied Body near South Park under the company’s new side guard brand Walker Blocker. A local business making safety devices for local freight, I love it.

And for any business owners of managers worried about the cost of the side guards, the safety benefits alone definitely make it worth it. But trucks with side guards also get a 4–7 percent boost in gas mileage. For big trucks, that much fuel adds up fast.

There’s good data behind the benefits of side guards, and now the guards are easily accessible locally. It’s time for the city to pursue rules requiring side guards, at least for companies that contract with the city. But regardless of rules, every company should be looking to get ahead of the game and add them on their own.

From the Walker Blocker press release:

Walker Blocker has created a side guard to fit all truck body types. Seattle’s SDOT is the first to have them installed. Side Guards are designed to prevent pedestrians, motorcyclists and bicyclists from going under the truck and being ran over by the rear tires. In light of recent tragedies involving large vehicles and bicyclists in the northwest these side guards are long overdue.

Seattle as a part of the Vision Zero Network ( www.visionzeronetwork.org ) is taking a stance on truck safety within the city limits. Teaming with Walker Blocker they are committed to making the streets safer one side guard at a time.

Walker Blocker is excited to be a part of a growing trend in truck safety. “We felt a call to action based on recent deaths involving bicyclists. With our parent company Allied Body Works, we wanted to make our side guards affordable, easy to install and modular in nature” says Doug Strauss Director of Business Development @ Walker Blocker.

Fleet managers should get ahead of the growing trend and making their fleets safer by installing side guards now.

Founder and Editor of Seattle Bike Blog.
View all posts by Tom Fucoloro →
This entry was posted in news and tagged allied body, sdot, side guards, walker blocker. Bookmark the permalink.