UW installs truck side guards for bike/walk safety, should law require these on every truck? 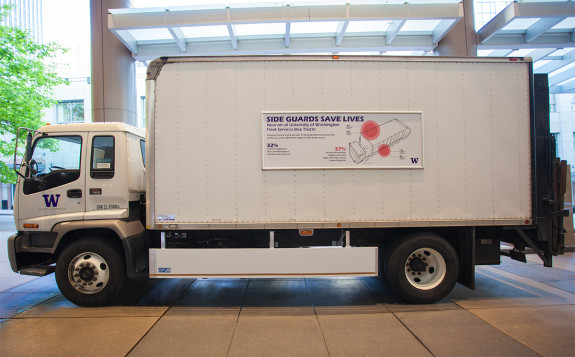 The University of Washington has installed side guards on all 31 box trucks in their fleet.

These guards, which hang down to cover the gap between the front and rear wheels of the truck, may not look like a big deal, but they could provide a huge safety increase for people walking and biking near trucks. Often, people killed or seriously injured in collisions with trucks are not necessarily hurt by the impact, but get knocked on the ground and run over by the rear wheels. The side guards are designed to push people out of the way of the wheels.

In fact, they are so effective that the UK has mandated side guards on all lorries. Since instituting the rule, deaths of people biking in side-impact collisions with lorries declined 61 percent, according to the UW’s press release. The number of people walking who were killed declined 20 percent.

This is a super easy way to increase safety. Seattle or Washington should mandate side guards on all trucks operating on local streets. We shouldn’t wait to take easy steps to prevent future deaths and serious injuries. No truck driver wants to be responsible for such a tragedy.

New York City started installing side guards on all city trucks earlier this year as part of their Vision Zero efforts, noting that trucks pose a disproportionate danger on city streets. The National Transportation Safety Board recommends installing side guards on all trucks (a national regulation would be the best possible solution). Boston passed an ordinance in the fall requiring all city contractors to also install side guards on their trucks. Boston noted that installing the guards cost only $1,800 per truck during their earlier pilot program, and that the guards would last for the entire life of the truck.

If you want to see the UW’s new side guard in person and learn more about them, they’ll have one on display tomorrow morning during Bike to Work Day along the Burke-Gilman Trail detour through campus. Details from UW:

The University of Washington has completed the installation of side guards on all 31 box trucks in its campus fleet. The UW is believed to be the first college or university in the country to install these life-saving devices, designed to prevent fatalities among bicyclists and pedestrians in side-impact collisions, on campus vehicles.

Media are invited to a demonstration and photo opportunity featuring a truck equipped with the new side guards on Friday, May 15, which is Bike to Work Day in Seattle and around the country. The event will take place between 7 and 9 a.m. Friday at the Cascade Bicycle Club Bike to Work Day Commuter Station on the UW’s Rainier Vista at Northeast Stevens Way.

“We’re happy we can celebrate Bike Month with this important step,” said Josh Kavanagh, UW director of transportation. “Side guards are another measure we’re taking to make it easier for people to use active, emission-free forms of transportation — and, most importantly, they could save lives.”

Side guards cover the space between the front and rear wheels on trucks with high ground clearance, shielding bicyclists and pedestrians from being run over by a truck’s rear wheels. They are required equipment in the European Union and some other countries but remain rare in the United States, though a number of cities have recently begun adopting them for their municipal fleets, including New York City, Boston, Washington, D.C., and Portland, Ore. (Many tractor-trailers are equipped with side skirts designed to increase fuel economy, as well, and some of those skirts are able to provide the same protection for bicyclists and pedestrians as side guards.)

Studies in the United Kingdom have shown that side guards can effectively reduce deaths and severe injuries among bicyclists and pedestrians.

The 31 UW box trucks outfitted with the new side guards range from 14 to 27 feet in length, and they serve 13 different campus departments. The trucks are part of a University fleet that includes 698 vehicles overall. The fleet is managed by UW Fleet Services, a division of UW Transportation Services. More information and resources on side guards are available from Volpe.

Founder and Editor of Seattle Bike Blog.
View all posts by Tom Fucoloro →
This entry was posted in news and tagged freight, side guards, uw. Bookmark the permalink.

6 Responses to UW installs truck side guards for bike/walk safety, should law require these on every truck?