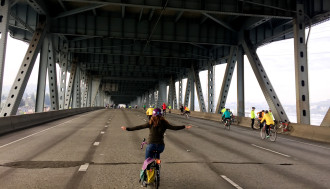 Emerald City Bike Ride 2016 on the I-5 Express Lanes. My fantastically wonderful spouse Kelli (who, full disclosure, works for Cascade) is pictured.

Cascade Bicycle Club starts 2017 without an Executive Director, but it still has a bold events lineup that includes the return of the Emerald City Bike Ride.

Though the date and route details are still TBD, last year’s Emerald City Bike Ride on the 520 Bridge and the express lanes of I-5 was awesome. So it’s great news that the ride is returning, since biking on freeways would be a great annual tradition in Seattle (well, at least until my dream of the I-5 Express Trail comes true).

Cascade will also spend much of 2017 searching for a new Executive Director to replace Elizabeth Kiker, who resigned in November effective December 31. The club has no interim Director. Instead, “The Cascade senior leadership team is currently serving in place of an interim Executive Director,” Communications Director Brent Tongco said. Senior staff and the Board are in the process of drafting a job description to guide their search.

Coincidentally, Portland’s Street Trust (formerly the Bicycle Transportation Alliance) fired its Executive Director Rob Sadowsky, Bike Portland reported yesterday. So the biggest bike advocacy organizations in both major cities are currently without permanent Executive Directors at the moment and will likely be searching to fill the spot at the same time.

As of today, registration is open for a few of Cascade’s 2017 rides. The rest will open over the next couple months.

Come along for the ride Bicycling Magazine named “one of four classic rides” in the nation. It’s guaranteed to be hilly, probably chilly and always a heck of a lot of fun. So get the dust off your bike and get ready for cycling season early!

Come join us for a fixed base tour through California’s fastest growing wine region – Paso Robles. This area is home to more than 250 wineries, many of which are small boutique producers that dot the countryside amongst 26,000 vineyard acres.

CTS is a training series designed to build endurance through increasingly challenging rides. It’s a great way to prepare for Cascade’s signature rides, such as the STP or RSVP, or use it as a stand-alone training program.

Ride for Major Taylor is a pledge ride to support the Major Taylor Project. Come ride with us Saturday, April 29, on a 25-mile journey through West Seattle, Delridge, Burien, SeaTac and White Center. Pledge your support while you explore these culturally rich and diverse communities, and ride with the Major Taylor students.

The Seattle Bike-n-Brews is an urban ride for those who appreciate city riding and quality Pacific Northwest microbrews. Pedal along the Duwamish and Green River Trails from Georgetown to Tukwila, taking in city views along the way, and return to the finish line party for cold brews and food.

Cruise through the heart of Woodinville Wine Country on the third annual Woodinville Wine Ride. The 30-mile route begins at the Woodhouse Wine Estates in Woodinville’s West Valley District, with riders utilizing the beautiful Sammamish River Trail and scenic low-traffic roads through Woodinville and its surrounding communities.

Flying Wheels weaves its way through Western Washington’s Snoqualmie Valley. This fertile valley is home to many organic farms producing some of the area’s highest quality produce, meats and cheeses. You will spend your day rolling from the valley floor to the ridges that define this beautiful place, a peaceful getaway not far from the city.

This year’s Ride Around Washington (RAW) travels the state’s rural northern frontier, challenging riders with epic climbs and rewarding them with a sublime scenic cycling experience.

This 200+ mile bicycle ride is the largest multi-day bicycle event in the Northwest, with up to 10,000 participants riding from Seattle to Portland in one or two days. The route takes you through the scenic valleys, forests and farmlands of western Washington and Oregon. Come ride what Bicycling Magazine has listed as one of the best cycling events in the nation!

Ride from Seattle to Vancouver, BC & Party (RSVP)

RSVP is a classic pedal on some of the most beautiful roads and trails the Northwest has to offer. This 175+ mile route of scenic backroads starts at the University of Washington and finishes in downtown Vancouver, BC over two days.

Stay tuned for ride registration opening dates for the following:

Ever imagine biking through a car-free Seattle? You’ll have your chance this year with the Emerald City Bike Ride. It’ll be the largest bike ride in Seattle on roads that are typically closed to bicycle traffic. The exact route is still being finalized.

The 500 riders on High Pass Challenge will embark on a challenging event, leading them through the beautiful Gifford Pinchot National Forest, including the Mount St. Helens National Volcanic Monument.

Cascade Bicycle Club presents the 24th Annual Kitsap Color Classic, our season finale. Pedal along the gorgeous Kitsap Peninsula and through some of the best riding country in the state! Friendly communities and terrific fall scenery make this a fun, must-do event.

Date to be announced

Founder and Editor of Seattle Bike Blog.
View all posts by Tom Fucoloro →
This entry was posted in news and tagged cascade bicycle club. Bookmark the permalink.