Is the I-5 Express Trail one step closer to reality?

With the Washington State Supreme Court smacking down a lawsuit by Bellevue developer and light rail hater Kemper Freeman to stop light rail on the I-90 Bridge, the question on everyone’s mind is: Does this mean the I-5 Express Trail is closer to reality?

… OK, fine, maybe Seattle Bike Blog is the ONLY place talking about an I-5 Express Trail. But I can dream, right?

To recap, the battle over I-90 light rail was ultimately about Washington’s absolutely awful, ridiculous, unsustainable and car-culture-protecting Amendment 18. Essentially, the constitutional amendment, passed during World War II, requires state gas taxes to go exclusively to “highway purposes.” The term “highway purposes” is often understood to mean “cars only,” but that understanding is shifting.

So basically, since Sound Transit is paying to lease the express lane space their trains will use and is thus reimbursing the gas tax fund for its investment, the state’s high court doesn’t see a problem with it constitutionally.

Kemper Freeman has spent millions of dollars and well over a decade of his life fighting light rail to Bellevue, so this decision is a huge loss for him (and a huge win for essentially everyone, including Freeman himself whose retail properties will now have a train from Seattle to their storefronts).

So this decision is great news for the region and our ability to put our existing massive infrastructure investments to the best use possible. After all, the region is always changing, and our transportation needs change with it.

Which brings us back to the I-5 Express Trail. There are two huge and completely wasted opportunities for more efficient use of the I-5 Express Lanes: Two-way express transit/HOV and extremely fast, safe and direct walking and biking.

There are existing hopes to turn the I-5 Express Lanes into a two-way space. This would dramatically help high occupancy vehicles and transit move through the constant congestion on the freeway. 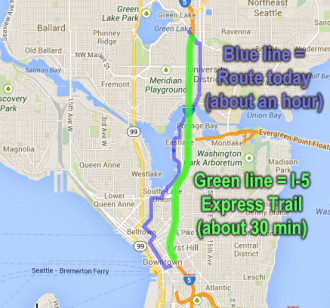 But why prevent access by the people who could benefit most from bypassing large hills and decreasing conflicts with cross traffic? A bicycle trip from 65th and Ravenna Boulevard to Seattle City Hall today would likely take an average person about an hour at a comfortable pace (obviously, people can make the trip faster by hustling and taking major arterial streets that are not comfortable or appealing to most people). There are also several steep hills and tons of stop lights involved.

On the I-5 Express Lanes, someone could pedal at a comfortable, non-sweaty rate and get there in 30 minutes (assuming a comfortable 10 mph pace). Someone a little more fit putting a little more gusto (but not THAT much) into their pedals could make the trip in 20 minutes without too much huffing and puffing.

Oh, and did I mention that it would be mostly protected from the rain?

To put this in perspective, it takes me about 20 minutes to get from my Central District home to City Hall, and I’m pretty tuckered out by the hills when I get there. So it would be as easy to bike from Ravenna to City Hall (and downtown jobs) as it is to bike there from the CD. In a neighborhood where nine percent of residents already bike to work, the trail would be a huge increase in the potential for people-powered transportation just by leveraging infrastructure investments we have already made.

The I-5 Express Trail isn’t sounding so crazy anymore, is it?

Below is a super quick little outline of how the express lane design could possibly work (designed using Streetmix). Basically, you could have at least one lane in each direction for buses and other high occupancy vehicles with space for one or two extra lanes to use as needed (exit lanes, peak direction capacity, etc). The exits would definitely be the hardest part to design (signals and exit-only lanes required?), and only west-side exits would likely be accessible by the trail (though there are also opportunities for new trail-only exits, like at NE 42nd Street in Wallingford and E Shelby St in Eastlake).

What do you think? Would the I-5 Express Trail be a smart regional transportation investment? Do you think we could convince Kemper Freeman to give it a try at the ribbon-cutting ceremony?

This entry was posted in news and tagged courts, i-5, i-5 express trail, kemper freeman. Bookmark the permalink.

48 Responses to Is the I-5 Express Trail one step closer to reality?