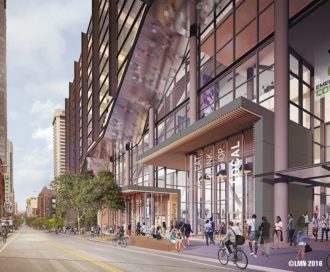 Concept image of Pine Street from the Convention Center Addition website. Decent start, but we can do better.

Much of the talk about public benefits from the planned Washington State Convention Center expansion has been focused on the very exciting idea of building a lid over more of I-5 connecting downtown to Capitol Hill and First Hill.

The Lid I-5 campaign hopes to get the full cost of a technical feasibility study paid for as part of the Convention Center project. That study is the first step to forming a plan that is ready to seek the kind of major grant funding the lid will need.

A lid study is a fantastic investment in a longer-term improvement for the Convention Center area, but the area is also in dire need to improvements today. That’s why complete and safe biking and walking connections should also be included in the public benefits, since these connections can and should be built as soon as possible.

“If we raise our voices, we could see key bike connections — including protected bike lanes along the Pike/Pine corridor and 8th Ave. — come online,” Cascade Bicycle Club wrote in a recent action alert.

The Pike-Pine corridor is one of the most-needed bike routes in the whole city. As the flattest and most direct way between downtown, the Convention Center and Capitol Hill, Pike and Pine are already very popular streets for biking. But people biking are forced to mix with general traffic or ride on the crowded sidewalks, neither of which are good options. Pine headed west (downhill) is not great, but Pike headed east (uphill) is genuinely terrifying. 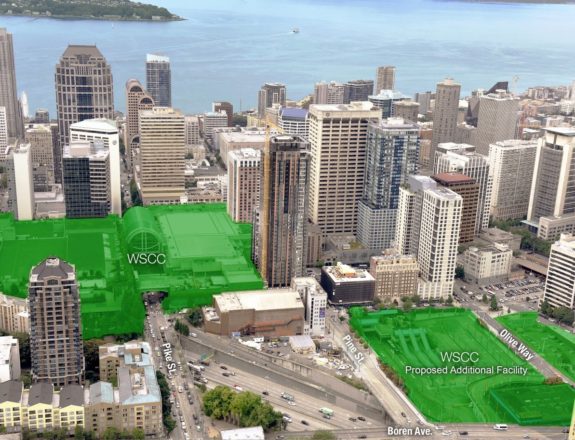 The Convention Center also serves as a major crossroads for planned bike routes on 7th and/or 8th Avenues, connecting to South Lake Union and beyond. Building complete connections on Pike/Pine and 7th/8th would create a network of protected bike lanes that would make navigating downtown safe and comfortable for the many, many people who have no desire to bike in busy mixed traffic.

Cascade Bicycle Club has created a handy form you can use to send an email of support for the bike connections. Here’s their sample text:

I am writing to express my support for funding safe bicycle connections through the Washington State Convention Center expansion public benefits package.

Biking to, from and within the Center City is not currently safe. The City of Seattle has an incredible opportunity to improve transportation for people biking — and to alleviate car congestion — by building out a safe network of protected bike lanes as outlined in the Bicycle Master Plan.

I would like to express specific support for two key bike projects that are directly connected to the WSCC expansion:

1. The Pike/Pine corridor is the most direct way to connect Capitol Hill (a popular neighborhood for bicycling) with the Center City. This is a vital East/West bicycle connection that will transform transportation options between these neighborhoods. In addition to serving residents, this corridor will also be vital to allowing visitors to the WSCC to safely explore adjacent neighborhoods by bike.

2. A protected bike lane on 8th Avenue will provide an important Northbound route connecting the Center City with South Lake Union neighborhoods, as well as the recently completed Westlake protected bike lane. It pairs with the forthcoming Southbound 7th Avenue bike lane, which is funded and nearly finalized in design.

I urge you to fund these two vital bicycle connections through the WSCC public benefits package. They will serve all people in Seattle, including those we will attract here with our new convention facilities.

[Go here to add your name]