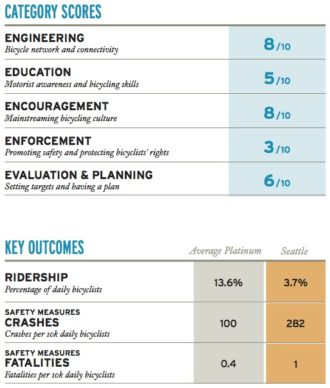 Seattle has again failed to reach “platinum” in the League of American Bicyclists’ Bicycle Friendly Communities ratings. The city has maintained its “gold” status, which is revised every two years.

The city lost a lot of points due to the rare all-ages helmet law in King County. Requiring helmets under the threat of getting stopped and ticketed by police is not a national or global best practice for bicycle safety and encouragement. Cities with the best safety records and the highest numbers of people biking almost never have such helmet laws for adults (many don’t even have them for children).

Instead, those cities focus on safe and inviting bike routes and encouraging more people to ride, triggering a safety in numbers effect.

The League specifically notes that the helmet law is likely getting in the way of bike share success. Again, best practices for bike share do not include mandatory helmet requirements. Instead, strong station density and low-stress, connected bike routes are important.

Though the numbers show an impressive 8/10 for “Bicycle network and connectivity,” the League docked serious points for the city’s reliance on sharrows. Sadly, this blog’s logo is still very relevant on Seattle’s streets:

LOLOL I could have sworn they removed this sharrow–did SDOT put it back?! By Ezell’s on 45th in Wallingford. #SEAbikes pic.twitter.com/PT2tluTm6H

The League specifically calls out a lack of action to improve biking downtown. The 2nd Ave bike lane opened shortly before the 2014 rating, and essentially no significant improvements have been made downtown since. They are excited about the downtown bike network plans, but you don’t get points until you build it.

The League also called out the city’s poor handling of bike lane closures during construction, suggesting that the complete streets policy on the books should also apply to construction zones. Yes! In fact, if you consider all the nasty bike detours that have been in place in the past two years, biking in and around downtown has actually gotten worse since the 2014 rating.

Still, Seattle remains the only “gold” city in Washington State and is tied with its closest peer cities like San Francisco and Minneapolis. Portland is the only city larger than 250,000 to achieve “platinum,” and many advocates there don’t think their city deserves it.

The point of all this is not just to get the rating. These League report cards are just one measurement tool for how the city has progressed compared to its peers. The larger point is to make Seattle a more comfortable and safe place to get around on a bike. It’s also to push Seattle to be a national leader, showing other places how a growing major American city can work for all its residents.

Our country already has many big cities that neglected walking and biking safety, and the results are horrible numbers of traffic deaths and injuries every day. Seattle can and must do better. 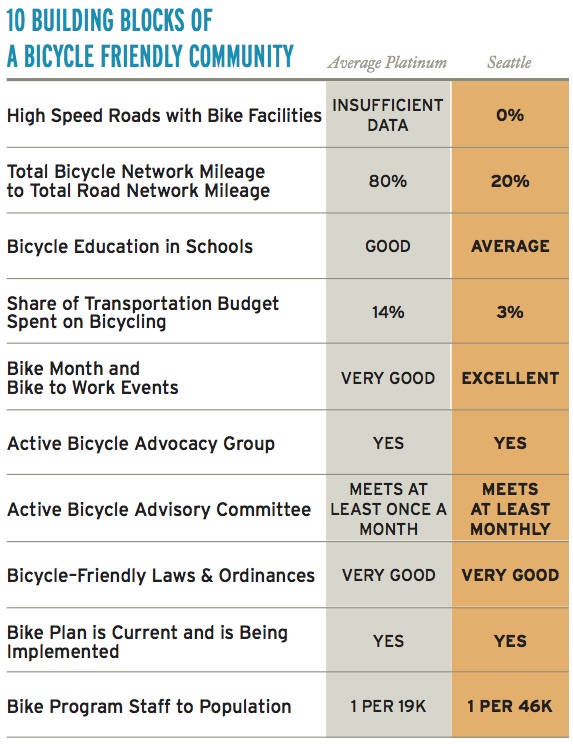 Seattle has a less extensive bicycle network than peer communities like San Francisco and relies more on sharrows. There are some great efforts to address this through the proposed downtown bicycle network and continued improvements to neighborhood greenways. Work to quickly implement connected networks of these higher quality bicycle facilities in order to provide a functional, safe, and comfortable network.

Quickly complete the Center City Mobility Plan so that the City can move forward with a strong downtown bicycle network.

Your application indicated that your Complete Streets policy could be improved by ensuring that construction projects don’t create barriers to people walking and biking and that bicycle improvements are coordinated with routine repaving projects.

Seattle has experienced several issues with its bike share program. It is exciting that an electrically-assisted system is coming, but the City should thoroughly study consider the issues that may frustrate bike share in Seattle, including the King County mandatory helmet law and the ability of people to move within the bike share area without encountering high stress or dangerous situations.

Work with local bicycle groups and interested parents to expand and improve the Safe Routes to School program to all schools. Providing bicycles in schools ensures that all students can learn to safely ride a bicycle regardless of the availability of a bicycle in their household.

Founder and Editor of Seattle Bike Blog.
View all posts by Tom Fucoloro →
This entry was posted in news and tagged bicycle friendly communities, league of american bicyclists. Bookmark the permalink.