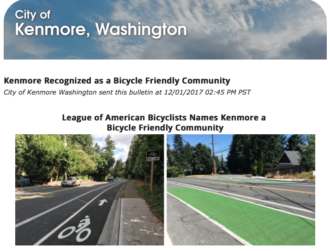 The City of Kenmore is Washington State’s newest Bicycle Friendly Community, achieving a Bronze rating from the League of American Bicyclists for the first time.

The League reviews applications from communities across the nation every other year. Seattle failed to improve on its Gold status last year.

Kenmore was shaken awake by tragedy in 2014, when Caleb Shoop was killed while biking in a crosswalk at NE 190th Street and 61st Ave NE. He was 19. The City took action to make some safety changes, and neighbors started to get organized to encourage more. But there’s still a lot of work to do.

So congrats to Kenmore on your Bronze! Now, the trail-connected community can get to work improving its ranking, which has the wonderful side-effect of making the city’s streets safer, healthier and more fun.

The League of American Bicyclists announced this week that Kenmore, WA is one of the country’s leading bicycle-friendly communities. The bronze level Bike Friendly Community (BFC) award honors Kenmore’s commitment to improving bicycling conditions through investments in education programs, infrastructure and pro-bicycling policies throughout the city.

Since 2014, Kenmore has made significant improvements to the City’s infrastructure that support bicycle travel, including:

“We have made some great strides in the last few years to improve walkability and bikeability in our community,” said Mayor David Baker. “We started our emphasis on bike safety in 2014 after Council passed the Target Zero Safety Initiative. The City has focused on increasing safety in our community through engineering, education, and enforcement. Our accomplishments have been recognized locally and nationally, and yet we have so much more to do. In the future, the City will be adding bike lanes on 68th Avenue NE and Juanita Drive, including the West Sammamish River Bridge. We will be increasing accessibility for pedestrians and bicyclists at many of our parks as well.”

Kenmore is one of only 65 communities across the United States to receive this award in 2017, joining more than 400 other visionary communities from across the country since the inception of the BFC program in 1995. Past recipients from neighboring eastside cities include Kirkland, Bellevue and Redmond.

The League of American Bicyclists is leading the movement to create a Bicycle Friendly America for everyone. The BFC program provides a roadmap to building a Bicycle Friendly Community and the application itself has become a rigorous and an educational tool in itself. Since its inception, more than 800 distinct communities have applied and the five levels of the award – diamond, platinum, gold, silver and bronze – provide a clear incentive for communities to continuously improve.

“We applaud these communities for making bicycling a safe and convenient option for transportation and recreation,” said Bill Nesper, Executive Director at the League of American Bicyclists. “We are encouraged by the growing number of leaders who see bicycling as a way to build more vibrant, healthy, sustainable and connected communities and be a part of the solution to many complex challenges faced at both the community and national levels. We look forward to continuing to work with these communities as we move closer to our mission of creating a Bicycle Friendly America for everyone.”

Founder and Editor of Seattle Bike Blog.
View all posts by Tom Fucoloro →
This entry was posted in news and tagged connect kenmore for safety, kenmore. Bookmark the permalink.

1 Response to Kenmore is now a certified ‘Bicycle Friendly Community’