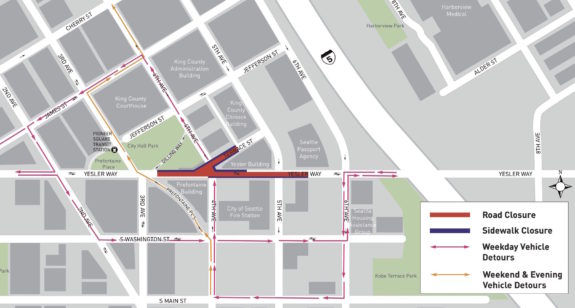 Yesler Way will be under construction from 6th to 3rd Avenues downtown until fall 2017. You should also expect construction and detours on 4th and 5th Avenues.

The city recently extended the 2nd Ave bike lane to S Washington St, so people biking westbound (downhill) on Yesler can make a left at the stop sign at 6th Ave, then go right on Washington to reach the bike lanes on 2nd. But note that this is pretty steep (I don’t expect too many people to head eastbound on this route).

When the project is complete, there will be a raised seven-foot bike lane under the bridge on 4th Ave where the current bike lane is located: 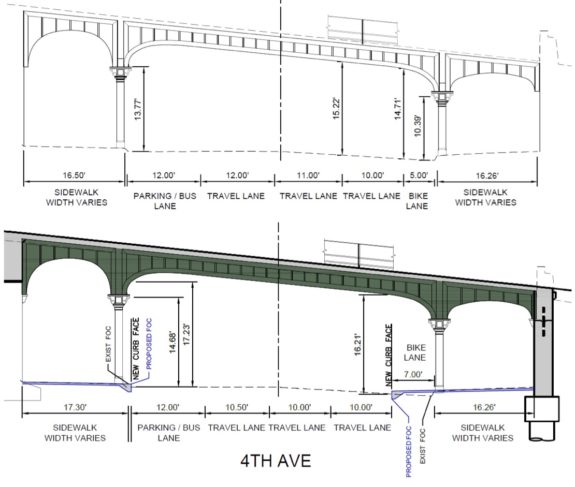 This is great news, and integrating a bike lane now will save money later when the city builds a protected bike lane on the rest of 4th Ave.

Unfortunately, we don’t know yet if this is right kind of bike lane because the city delayed the Center City Bike Network planning work last year. Seven feet (less when you count the curb and the clear zone next to the pillar) is decent for a one-way bike lane, but it is far too skinny if the city chooses a two-way bikeway on 4th Ave like on 2nd Ave.

And what if the city chooses 5th Ave for a bike lane? This bridge rehab project currently plans no protected bike lanes there.

Had the downtown bike plan work continued, this big-budget project could have built the correct style of bike lanes in the right places for little-to-no extra cost. Now if we choose a two-way bike lane on 4th and/or bike lanes on 5th, those projects may need to reconstruct their sections under the bridge at significant cost.

As you point out, the proposed seven-foot bike lane will only be installed directly under the Yesler Way Bridge. This will not preclude the possibility of installing a 2nd Ave style two-way bike lane on 4th Ave in the future. However, this type of improvement was not a part of this project’s scope.

During design of the Yesler Way Rehabilitation Project we discussed options for bike improvements and the bike lane on 4th Ave under the bridge. The final design of the one-way raised lane was chosen because:

Saving money by combining bike improvements with big projects like the Yesler rehab project is one of the biggest arguments for all this bike planning Seattle has been doing. So it’s frustrating that we somehow didn’t get far enough along in the downtown bike plan process to know what kind of bike lane to build under this $19.8 million bridge project.

Maybe there’s still time to modify the design if we choose soon enough. One more reason to stop delaying and move forward on the plan now.

The fall 2017 completion date for the Yesler project sets a pretty good deadline for building a complete 4th Ave bike lane (or bike lanes on both 4th and 5th). Imagine if the city opens the bridge and the new bike connections at the same time.

16 Responses to Yesler bridge work starts today + Will they build the right kind of bike lanes?