Must Read: ‘Bike equity must be more than a conversation’ 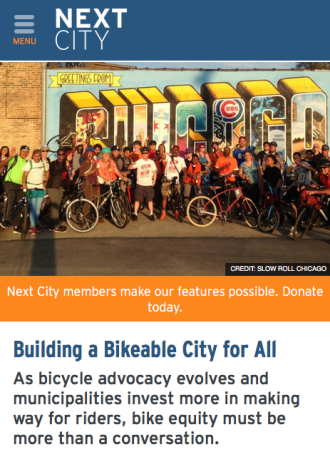 Click to read the full story at Next City.

Seattle’s Josh Cohen has a must-read story out on Next City looking at how too many bike advocacy groups around the U.S. struggle (or even resist) embracing equity as the core of their work.

But Cohen also interviews several more recent leaders in the bike advocacy movement who get it, like Show Roll Chicago’s Oboi Reed and Cascade Bicycle Club’s Ed Ewing. And they have great advice to those organizations willing to listen, soul search and make big changes to their funding priorities, staff and board members.

“Until these organizations look like America, we’re not going to see much change,” Julian Agyeman told Cohen. Agyeman is a professor of urban and environmental policy and planning at Tufts University. That has proven to be a big pill to swallow for many organizations.

After all, a lot of organizations started as bike ride clubs mostly serving white men. The League of American Bicyclists (formerly the League of American Wheelmen) explicitly banned non-white members and racers in the late 1800s, so our nation’s biggest bike advocacy organization has a disgraceful history of segregation just like so many other American institutions.

It’s too easy for bike advocacy organizations to see diving into the social equity work of other community groups as “mission creep.” But the ability to have tunnel vision focused only on biking is a product of privilege. If biking is your top concern in life, don’t forget to step back and count your blessings.

“Instead of looking at it as ‘hey how do we increase biking in this community of color?’ we’re looking at ‘what are the needs of this community and if we better understand the needs, how does the bike help support those needs?’” Ewing told Cohen. “The biking is secondary. The community needs are primary.”

It’s a long read, but worth every word. Here’s an excerpt:

On its face, “bike equity” is a simple concept: Bicycling should be a safe, convenient, viable transportation option for everyone, regardless of race, income or geography.

But of course equity is not a simple objective in America where hundreds of years of intentional violence against and disinvestment in people of color have left us with segregated neighborhoods and staggering disparity.

“Equity means focusing on people who need the most and can benefit most from increased bike share,” [Slow Roll Chicago President Oboi] Reed says. “People of color and low- to moderate-income people should get more bicycle resources than neighborhoods that are predominantly white and middle to upper income. Communities of color … are disproportionately impacted by violence, healthcare disparities and unemployment, and increased bike mode share can have an impact on all three.”

1 Response to Must Read: ‘Bike equity must be more than a conversation’