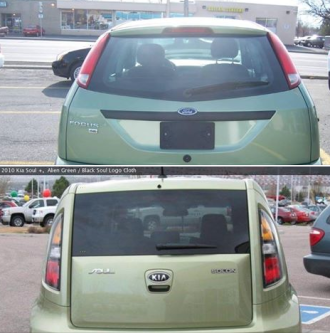 Anderson posted these sample images of the types of car that may have been involved. It may be missing the passenger mirror.

Police are searching for the person who struck and injured a man biking in Issaquah Wednesday morning and fled the scene.

Though he was hauled off to the hospital on a stretcher, Dave Anderson escaped the collision with minor injuries. He’s scraped up and bruised, but was able to give interviews to media asking for help finding the person responsible.

“I have no doubt that the driver who was less than 3 feet from me was aware that they hit me,” Anderson wrote in a Facebook post about it.

Both the suspect and Anderson were headed northbound on the Issaquah-Hobart Road near Foothills Baptist Church, the Issaquah Press reports when the person driving crossed into the shoulder and hit Anderson. Police say he was thrown 40–50 feet.

The father of two has been riding his bike to work in Redmond two or three days a week for the past six years. The stretch of road where the crash happened has a shoulder about three feet wide that Anderson uses.

“I always felt that this was the safer route to take, but I guess I was mistaken on that,” he said.

Anderson was wearing a bright yellow jacket at the time, along with a helmet that contained a flashing light. He remembers seeing a sage green car next to him right before the impact.

“I kind of skidded over a foot, but was still trying to stay upright. We’re just kind of pushing along,” he said, describing what happened. “The bike gets wiped out from under me and I tumbled a bunch of times.”

“I’m laying in the ditch with my head in the road,” he continued, “and I look up and the car’s just driving away. No brake lights.”

The suspect was likely driving a green late-model car, likely a Ford Focus, KIA Soul or similar. If you see a newer green hatchback missing a passenger mirror or have any information, call the King County Sheriff’s Office at (206) 296-3311 (or call 911 if the tip is timely).

Sorry this happened to you, Dave. Thanks for making such an effort to reach out to media to spread the word. This could have ended so much worse. And as Anderson told KOMO, hit and run is “not an accident.”