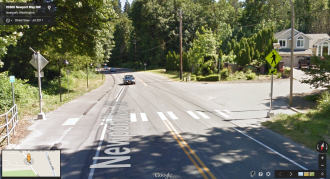 Image of the intersection from Google Street View.

A 67-year-old woman struck four-year-old Haochen Xu while he crossed in an Issaquah crosswalk with his mother Friday. Sadly, he died the next day in the hospital.

Our deepest condolences to his family.

A roadside memorial has been set up at the crosswalk, according to Issaquah Reporter.

Issaquah Police and the Washington State Patrol are still investigating. The woman driving remained at the scene and was not found to have signs of impairment.

“For some reason, the driver just failed to see them,” Issaquah Police Commander Stan Conrad told the Issaquah Press. The boy’s mother was just steps behind him, pushing his bicycle.

But neighbors have been asking for safety changes on this street for years, and now they’re demanding changes. An online petition clearly lays out the problem and some possible solutions (see text below, then go sign it). No action is not one of the options. Hundreds have already signed.

Two years ago, a man with two service dogs was nearly hit in the same crosswalk. He was not injured, but the dogs were killed, according to a different Issaquah Press story. After that, neighbors urged the city to lower the 40 mph speed limit and make other safety improvements. The city added more flashing lights to the crosswalk sign, but decided against lowering the speed limit.

It wasn’t enough. Here’s the text of the petition:

On June 26, 2015, a 4-year-old boy was struck and fatally injured by a vehicle while in the NW Oak Crest Drive/ Newport Way NW crosswalk. This incident was due in no small part to the inadequate safety measures for that intersection.

Newport Way NW has a 40 mph speed limit, which is very high for a road bordered by multiple residential sections. Residents of surrounding neighborhoods have noted that cars also tend to exceed this speed limit with some frequency, especially during peak driving times.

The sidewalk/ walking path in this area is used frequently by bicyclists, joggers, runners, and families. As the traffic flow has increased on Newport Way NW, the safety of those using this path has been compromised. In order to prevent any further injuries, accidents, or fatalities, the City of Issaquah needs to improve the safety of the NW Oak Crest Drive and Newport Way NW intersection.

Petition:
We, the undersigned, call on the City of Issaquah to improve the safety of the Oak Crest Drive and Newport Way NW intersection. We propose that one or more of the following measures be taken:

1. Lower the speed limit of Newport Way NW between SE 54 Street and Hwy 900

2. Place speed bumps on either side of the NW Oak Crest Drive- Newport Way NW intersection

3. Install a traffic signal at the intersection of NW Oak Crest Drive and Newport Way NW

If the City of Issaquah has other viable options that would do an equally good or better job protecting this crosswalk, of course those options should also be considered instead of or in addition to the proposed ideas.

Founder and Editor of Seattle Bike Blog.
View all posts by Tom Fucoloro →
This entry was posted in news and tagged deaths, hao chen xu, issaquah. Bookmark the permalink.