Two people crash their cars in Bellevue, kill toddler in stroller on sidewalk

A person driving a Dodge Durango SUV t-boned someone driving a Nissan Sentra this morning in Bellevue. The collision sent the Sentra onto the sidewalk where it struck three people, including a mother pushing her 28-month baby girl in a stroller.

The toddler was killed.

Our deepest condolences go to the mother — who also suffered minor injuries — and the child’s whole family and community of loved ones. 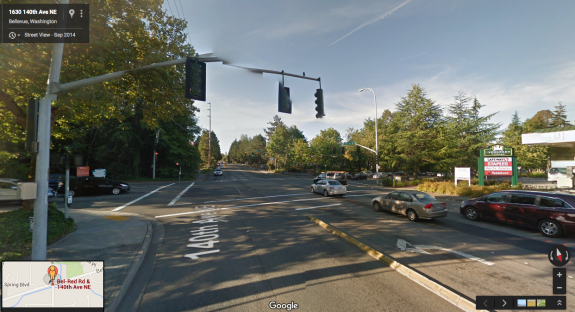 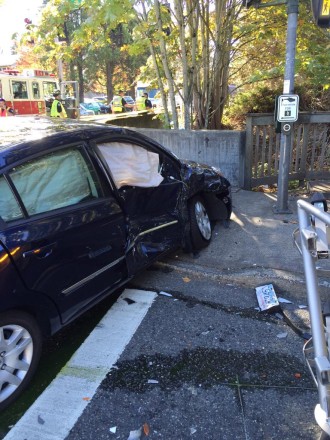 Image from the Bellevue Fire Dept.

Bellevue Police said the person the Durango was headed south on 140th Ave NE around 10:15 a.m. when the person driving the Sentra was making a left turn onto westbound Bel-Red Road, according to KOMO.

The collision sent the Sentra onto the sidewalk on the southwest corner where the mother, her child and a third person were. The third person also had minor injuries, as did the two people driving.

Police do not suspect drug or alcohol use were factors. Exactly how and why the collision happened is still under investigation.

140th Ave NE has five-to-six lanes and Bel-Red Rd has five lanes, so the intersection is rather large. Damage to the Sentra shows how much force the impact had.

2015 has been a deadly year for children on Eastside city streets. In June, two-year-old Susie Dreher was killed in Redmond Town Center and four-year-old Haochen Xu was killed in a crosswalk in Issaquah.

UPDATE: Also Tuesday, KIRO TV’s Nick McGurk reports that a young child in a car was sent to the hospital when a collision flipped the car in Seattle’s Eastlake neighborhood.

24 Responses to Two people crash their cars in Bellevue, kill toddler in stroller on sidewalk