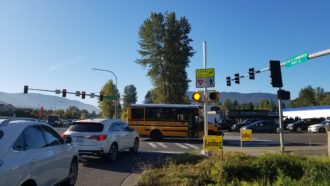 Photo of the intersection in question, from John Duggan.

Wayne Wagner was biking on the East Lake Sammamish Trail September 22 when a woman driving made a right turn into him at SE 56th Street and killed him, according to the Issaquah Reporter. Wagner was 69.

The trail runs alongside East Lake Sammamish Parkway in this part of Issaquah. At the intersection with SE 56th Street, the trail crosses 56th Street as a crosswalk. People driving are allowed to turn right at the same time that the crosswalk has a “walk” signal, but signage clarifies that they are supposed to yield to people in the crosswalk.

The incident is still under investigation, so it’s not yet clear what (if any) charges will be filed.

Cycling attorney John Duggan (also a Seattle Bike Blog advertiser) is pursuing a wrongful death case, and is seeking anyone who has had incidents at this trail crossing. Get in touch by emailing [email protected].