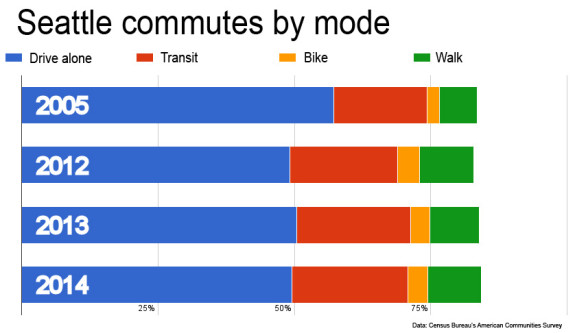 The 2014 Census data on work commute modes is out, and it shows that biking to work in Seattle remains somewhere between 3.1 and 4.3 percent. The survey (** see disclaimer about the survey below) has returned biking numbers within this margin of error since 2010. That’s about 14,200 Seattle residents biking to work all or most days.

Driving alone to work was, once again, below the the 50 percent mark, showing a continued trend in which more and more Seattle workers depend on a multimodal transportation system to get to their jobs. As we reported previously, 57.3 percent of Seattle workers drove alone to work in 2005. So driving alone is still the dominant mode for getting to work, but it’s losing its hold steadily.

Perhaps the biggest news is that transit had it’s strongest year yet, clocking in between 20 and 22.4 percent. If these trends continue, it may only be a couple years before half as many workers in Seattle take transit as drive alone.

As of 2014, 34.7 percent of Seattle residents bike, walk or take transit to get to work, up from 26.2 percent in 2005. That’s compared to 49.5 percent who drive alone to work. If trends keep going as they are, biking, walking and transit combined could overtake driving alone in the next decade. When exactly will it happen? That depends on how boldly the city, region and state invest to support and grow multimodal transportation.

Passing Move Seattle, for example, is vital to achieving this goal. So is a strong Sound Transit 3 in 2016.

New Orleans bike commutes clocked in at 3.4 percent, barely below Seattle in this year’s ACS. In 2013, they were higher than Seattle, which was probably the biggest surprise in the nation. But the strong 2014 data shows that the Big Easy is here to stay among the nation’s top biking large cities.

Portland, meanwhile, cracked the 7 percent ceiling that has been taunting them for years. Among big US cities, Portland remains in a league of their own.

And though Seattle has a lot of bold plans for protected bike lanes and neighborhood greenways (and 520 and the waterfront) in upcoming years, we won’t see the results of those efforts reflected in the Census data for a while. Maybe we’ll get a bump from the warm weather in 2015, but I don’t see Seattle making any major gains until major bike route changes help better connect homes to jobs.

If you have any ideas for how to encourage more bike commuting while the city works on the infrastructure, let’s hear ’em in the comments below.

** Take these numbers with a grain of salt. They are the result of surveys and have a fairly large margin of error. So it’s hard to draw many conclusions from year-to-year changes unless the jump is huge. Rather, the data is more useful if you zoom out a bit and look at it over many years, which is why I include the 2005 data in the graph above. It’s also important to note that the survey only measures commute trips, and people surveyed are only allowed to select the single mode they used for the most distance “last week.” So all those trips to the park or dinner or the grocery store do not count. Neither do trips made by children, people out of work or people who are retired. Perhaps most importantly for Seattle, people who combine biking and transit would likely be counted in the public transportation column, not the bike column. And if you only bike to work once or twice a week, you don’t count either.