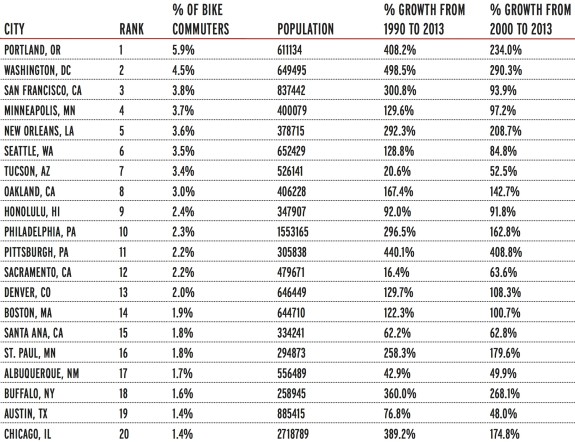 From the League of American Bicyclists (download full report here)

Cities from the East Coast, the West Coast, the Midwest and even the Deep South all passed Seattle in bike commuting in 2013, according to Census survey data just released. Seattle fell all the way from number three to number six on the list of large US cities.

It was pretty clear last year when 2012 American Communities Survey data was released that Washington DC was on a fast bike commute rise as the nation’s capitol built comfortable protected bike lanes all around the city. DC was essentially tied with Seattle at 4 percent, but they were rising fast compared to Seattle’s slow rise. Since Seattle was much more sluggish in building any ground-shaking bike improvements between 2012 and 2013 (developing the Bike Master Plan took center stage), it was pretty clear DC was going to pass us. And they sure did, rising all the way to the number two spot behind sluggish Portland.

San Francisco, Seattle and Minneapolis have pretty much always jockeyed for the spot under Portland in these bike commute numbers in recent years, and both cities edged out Seattle in 2013 data. But the real shocker is New Orleans, which rose all the way from 2 percent to 3.6 percent to overtake Seattle for the number five spot.

Now, before people read too much into these numbers, it’s important to realize that the survey has a pretty large margin of error. Seattle’s 3.5 percent bike commute rate might look like a big fall from 2012’s 4.1, but it is on the low edge of the 0.6 percent margin of error. It is also higher than 2011 and falls roughly in line with Seattle’s slow growth trend in the bike commute rate, which is up 85 percent since 2000.

It’s likely the New Orleans figure is a statistical blip as well, but it sure is remarkable to see a southern city pass Seattle like that. It’s clear biking in New Orleans is growing fast, even if the number corrects itself next year. Congratulations, NOLA!

It’s also important to note that the survey only measures commute trips, and people surveyed are only allowed to select the single mode they used for the most distance “last week.” So all those trips to the park or dinner or the grocery store do not count. Neither do trips made by children, people out of work or people who are retired. Perhaps most importantly for Seattle, people who combine biking and transit would likely be counted in the public transportation column, not the bike column. And if you only bike to work once or twice a week, you don’t count either.

But the survey is a valuable data source to see changes over time, and it’s clear that Seattle is not making changes to encourage bike commuting as boldly as so many other US cities in nearly every region of the country, which are rising more quickly. Where for decades the Pacific Northwest reigned supreme in bike commuting, even Portland’s spot in the lead might not be safe for many more years.

Transit use in Seattle, however, showed its strongest year in recent history. Nearly 21 percent of people got to work by public transit, a big jump up in the city’s steadily rising transit column and beyond the 1.1 percent margin of error. Can you believe we are going to cut Metro bus service? How insane is that?