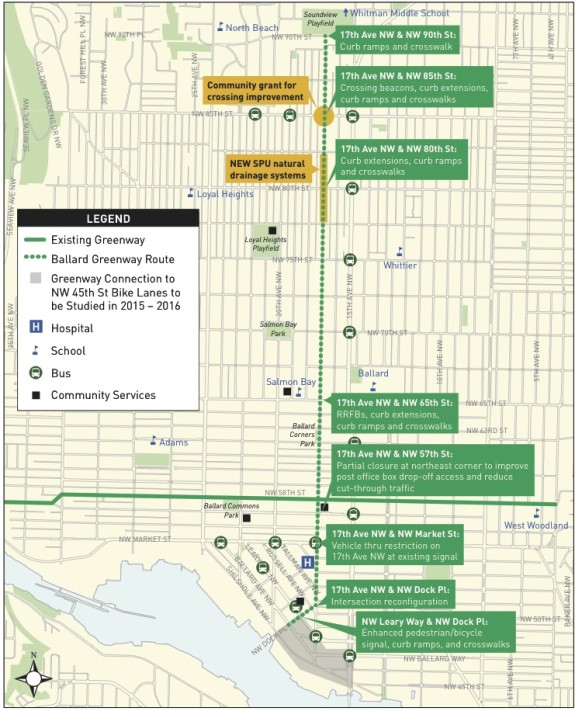 The city is starting construction on a long north-south neighborhood greenway in Ballard connecting Whitman Middle School to the Ballard business district.

Unfortunately, the route will initially stop just a couple blocks short of connecting to the Burke-Gilman Trail. The city plans to study that connection in the next year (if the Missing Link were completed, this wouldn’t be a problem).

Construction will be ongoing during Summer Parkways September 19, but shouldn’t interfere with the event, according to the project website. In fact, it could be a great way to give the route a try.

More details on the construction and schedule going forward this month:

Construction on the Ballard Greenway begins on September 1.

Have fun and check out the neighborhood greenway route during Ballard Summer Parkways on September 19 from 11 AM to 3 PM. Parks along the route will be full of family activities. Greenway construction will not interfere with this event.

NW 90th Street construction begins on September 1: Construction will begin on NW 90th Street adjacent to the walkway that connects to 17th Avenue NW. Crews will install new curb ramps at this location during the week of September 1 and return later this fall to install a crosswalk. Construction of curb ramps will last approximately 5 working days and through traffic will be maintained. Pedestrians will be detoured around the work areas.

17th Avenue NW and NW Dock Place to take place on September 1: The intersection of 17th Avenue NW at NW Dock Place is being reconfigured to clarify the right of way and reduce conflicts between people walking, biking and driving. Crews will paint the pavement and install flexible bollards at the boundary of this new open space to formalize the intersection. The changes preserve all vehicle movements, including emergency vehicles and access to the adjacent alleyway. As a result a new public space is being created and we are working with community members to leverage the opportunity. Additional upgrades will continue after the Ballard Greenway project is complete. The contractor will install delineator posts and complete striping on September 1.

17th Avenue NW and NW 85th Street construction begins on September 3
On Thursday, September 3, we’ll begin building pedestrian safety improvements at the intersection of NW 85th Street and 17th Avenue NW. SDOT’s contractor will work on one side (north or south) of the intersection at a time in order to maintain traffic flow. During this time, 17th Avenue NW will be closed to through traffic. Those needing to access 17thAvenue NW will need to use NW 83rd Street or NW 87th Street.  Temporary pedestrian paths in the area will be clearly marked and temporary Americans with Disabilities Act (ADA) ramps will be installed. Traffic lanes on NW 85th Street will be shifted to accommodate work zones and two-way traffic will be maintained. Work at this intersection will last approximately 28 working days (approximately 6 weeks).

As construction progresses throughout the corridor, you can expect the following:

This work is weather dependent and will be rescheduled if necessary.

Click here to view pre-construction mailer sent to properties along the greenway corridor.