What’s your idea for an easy street fix? Try it out on Park(ing) Day! 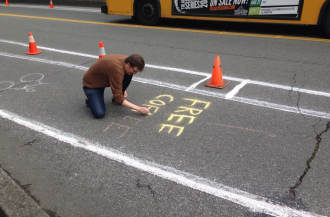 Have you ever said something like this to yourself while biking or walking around town?

“If only this bike lane went a little further, I could make this connection safely.”

“There are always people running across the street here, why not create a safe crosswalk?”

“It would be so cool if this area had a little park.”

Well, maybe it’s time to put that idea into action and demo to your neighbors and city leaders how easy it could be to make your street safer and more activated. And Seattle Neighborhood Greenways wants to help you make your idea happen on Park(ing) Day, which falls on September 18 this year (and for the first year, parks will stay open until 7 p.m.).

Park(ing) Day is one of my favorite days of the year (see my coverage from last year). For one day, people go out and turn a parking space or set of spaces into tiny parks. The day happens all over the world, but Seattle is among the cities that support and encourage it to happen. For one day, we reimagine all the different ways we can use urban space that would otherwise simply store a couple cars. 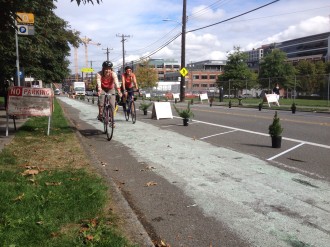 Cascade Bicycle Club set up protected bike lanes on 9th Ave near Denny Park to give people a taste of an actual safe bike route in South Lake Union.

For 2015, Seattle Neighborhood Greenways is holding a contest to gather ideas for Park(ing) Day parks. They will then help set up their favorite ideas (including helping with the paper work). You can also win prizes.

The deadline to submit to their contest is Sunday (August 16), so you better get working. See this blog post for instructions on how to submit your idea.

Cascade Bicycle Club is also organizing a bunch of projects all over the city, and they need volunteers to make them happen. Sign up for a shift here.

Otherwise, you can put your application together yourself by August 28. Details and forms are on the city’s Park(ing) Day website.

2 Responses to What’s your idea for an easy street fix? Try it out on Park(ing) Day!