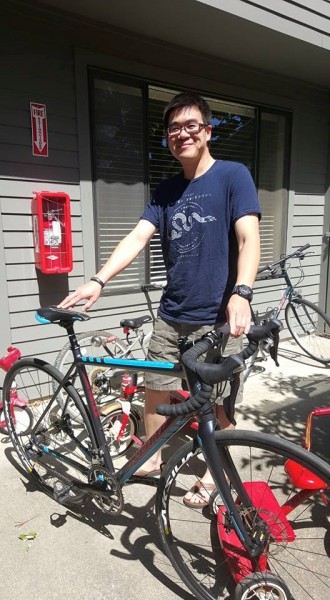 Image from the GoFundMe crowdfunding page.

What started as yet another stolen bike story morphed into a wonderful tale of a guy who simply did the right thing and a community that came together to thank him … and then some.

Yang bought a $500 bike on OfferUp — a free classifieds website based in Bellevue that has become a hotbed for selling stolen bikes. It was a nearly new Kona, which Yang wanted to use as a commuter to get around town.

But the bike he bought actually belonged to Brock Howell, the Policy and Government Affairs Manager at Cascade Bicycle Club who had paid $2,000 for it a few weeks earlier. Howell spotted his bike on OfferUp, but it had already been sold. After pressuring OfferUp staff to contact the likely buyer, Yang got in touch with Howell through his Bike Index listing.

“He found that it was in fact my bike — the bike that was stolen from me on July 4 and that I had purchased just three weeks prior for my ride on Cascade Bicycle Club‘s Seattle-to-Portland ride,” Howell wrote. “Yang immediately emailed and called me.

“I was just a block away when he called. I walked over to his home, and he gave me the bike right then and there.”

Yang was honest and awesome, but he was also out $500 and didn’t have the commuter bike he was looking for. So Howell decided to reach out to the community at large to see if anyone wanted to help out. He posted the story to a GoFundMe campaign with the goal of raising the $500 Yang paid. He also offered to help Yang find a bike more suited for the commuting Yang wanted to do (the Kona was a bit big and designed more for fast riding).

Within hours word had spread, and people had donated $500 to the effort (Howell put in $250 of his own to get things started). But the cash kept coming in. As of press time, $1,235 has been donated.

The first $1,000 will go to get Yang a sweet ride, twice the amount he paid for Howell’s stolen bike.

Any money above $1,000 will go to Bike Index, a website and database run by a couple guys who are passionate about stopping bike theft and reuniting people with their stolen rides (Seattle Bike Blog’s Stolen Bike Listings are powered by Bike Index). Bike Index fills a vital information gap that helps connect directly to theft victims and helps buyers check whether a bike is hot. More and more, police use Bike Index in the field to check on suspicious bikes and to reunite people with their bikes rather than sending those bikes to their departments’ often Byzantine recovered property warehouses.

Basically, Bike Index is a rare lifeline for people hoping to ever see their bikes again. And it works.

But Bike Index doesn’t have an obvious and established source of income yet, though they are working on developing one. So that’s why you should go donate what you can to Brock’s fundraiser right now. Help keep Bike Index going. They are instrumental in so many of the bike recovery stories we report, and they work hard behind the scenes trying to get police to integrate Bike Index into their work to get proactive about stopping bike theft.

In fact, this happens every day in Seattle. Stay tuned this week for a fun story about how King County Sheriff’s officers use Bike Index in downtown Seattle…