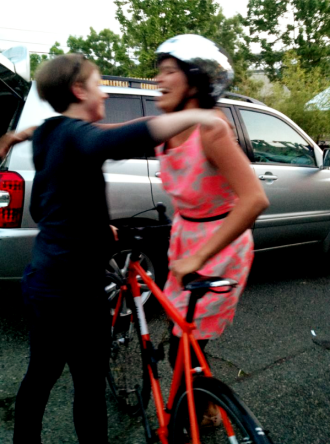 Seattle has a new hero, and her name is Alex Cruse.

Alex was in a car in Wallingford with her fiancée and soon-to-be father-in-law when she spotted an orange and white All-City Macho Man bike near an apparent homeless encampment just off Northlake Way.

You see, Alex used to work downtown and often saw shady bike exchanges on the street. So being a real life super hero, she naturally started browsing Bike Index regularly just in case she spotted someone’s ride in the wrong hands. And Sunday, it finally happened.

But that’s not all. After convincing her fiancée Nicole and Nicole’s father they should turn around and park across the street from the bike, she pulled the listing back up on her phone and confirmed that the bike she saw was a match.

“I was all fired up because I finally saw one of these bikes and I can help out,” she said.

Then Alex walked right over to the bike, which was sitting near a group of men, and bravely lied to them: “This is my roommate’s bike. It was stolen a couple days ago. I’m not gonna give you guys any trouble, but we’re out of here with the bike.”

She said one of the guys got up and left, while the rest of them tried to play it off like, “oh, it just showed up, we swear.”

She didn’t stick around to chat more. With the bike in her possession and nobody seeming interested in stopping her, she loaded it into the car and they drove away. En route home, they passed a big bike parade of about 30 people all dressed up in costumes. Oh, Seattle, don’t ever change.

So Alex popped back on Bike Index and contacted the owner through the site to tell her the good news.

“She kind of freaked out on the phone,” said Alex. Zanna Furness couldn’t believe her bike had been found. Zanna told Alex she and some friends had just arrived at Fremont Brewing, so Alex and Nicole hopped back in the car and headed there.

“I’m so lucky,” said Zanna. “My friends and I jumped over the beer barrels [Fremont uses for a fence] and ran over to them and hugged them.”

And it must have been quite a sight because Zanna and her friends were all in costumes. They were on a big group bike ride around Lake Union to celebrate Zanna’s birthday, the same costumed bike ride Alex saw after recovering Zanna’s bike.

Needless to say, Alex got a hero’s welcome.

“They gave me a ton of beer,” said Alex.

Bike Index is a great tool for helping to reunite owners with their bikes, but usually it works the other way around: Person finds a suspicious bike, runs the details or serial number through Bike Index and gets a hit. But it’s rare for someone to just happen to check Bike Index listings, remember what’s been stolen recently, then spot a bike somewhere around town.

“I’m so thankful that Bike Index exists,” said Zanna. She was especially lucky because even though she had known she should record her bike’s serial number somewhere, she “would just get busy and never get around to it.” It’s way harder to get a bike back if you don’t have the serial number recorded in the police report and on Bike Index.

Aside from reminding all of you to record your bike’s serial number right now, she also had this advice for everyone reading: “Don’t ever trust a cable lock.”

So in a grim time when the powers of bike theft evil are going to greater lengths to carry out their nefarious plots (Really? They’re stealing whole bike racks now?), a hero has emerged with powers far greater than any thief, a hero who will stand up for what’s right, a hero who will look a thief in the eyes and boldly say, “This is my roommate’s bike, it was stolen a couple days ago. I’m not gonna give you guys any trouble, but we’re out of here with the bike.”

We salute you, Alex. 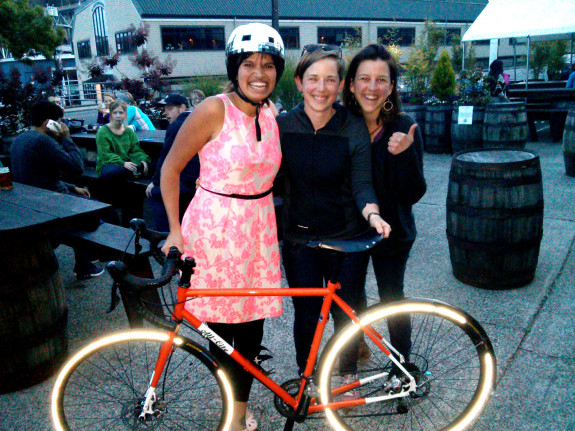 Zanna (left) with Alex and Nicole. Image from Zanna.