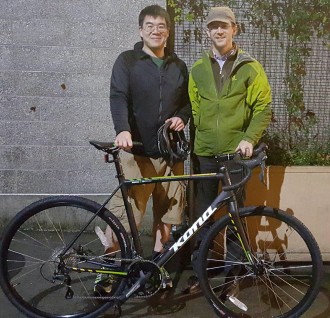 Howell (right) delivering a crowdfunded Kona to Yang Fan, who returned Howell’s stolen bike after unknowingly buying it through Offerup. Photo from Howell via Facebook.

To many grassroots bike activists in the Seattle area, Brock Howell may have been until recently the face of Cascade Bicycle Club.

Howell left Cascade in November shortly after an election where the club’s advocacy team was a major part of the Move Seattle levy win, and seven of eight Cascade-endorsed City Council candidates won their seats.

A seriously hard worker (“like hey, dude, you gotta sleep at some point”), Howell has been a major force behind the club’s grassroots-empowering advocacy efforts since joining the staff in 2013.

Though he credits his predecessor Craig Benjamin for framing up the idea, Howell has been a major force behind the club’s Connect Seattle teams along with fellow advocacy staffers Robin Randels and Kelli Refer (who, full disclosure, is my wonderful spouse). Fueled by the club’s innovative Advocacy Leadership Institute (“ALI”) — which trains everyday people to become effective campaigners and advocates — the Connect teams are led by engaged community members determined to make change.

“The whole point of ALI is to get more people trained to do great organizing,” a much more relaxed Howell said recently over beers. The big shift in thinking here is that volunteers should get a core say in what is important and how to make the changes needed to get there.

“Don’t just tell them what they care about … You need to come to people with: ‘What is the goal? What does it take to achieve that goal? And what are the tactics?'” he said. “If they weren’t involved in the decision to make it a priority, they may not be so motivated.”

Sometimes that means making a viral video about how dangerous the Ballard Bridge is, and sometimes that means getting out the vote for bike-friendly candidates or ballot measures. And sometimes that means partnering with groups like Seattle Neighborhood Greenways for a joint policy effort around a major project, such as the largely successful work to get better walking and biking conditions in the new 520 Bridge plans.

But just because biking and safe streets advocates had a big election, this is no time to stop advocating. If anything, the Move Seattle funds make grassroots organizing even more important, Howell said.

“Bike advocates need to recognize that we have a city that is supportive, and their role is to continue to set an even bolder vision and to hold the city accountable to that vision.”

Projects are still going to face the same political realities as any urban change does, and advocates need to be the “counterforce” to the pushback, he said.

“Make sure we push through and provide political capital so SDOT can make it happen,” he said. Bike lanes on Eastlake and Rainier Ave? Short-term fixes to the Ballard Bridge? It’s all gonna take a lot of hard work and persistent activism.

And when he says “we” he means it, because Howell isn’t planning on going anywhere. In fact, he’s already started a blog called Bike Happy Cascadia “just to share the goodness of biking in Cascadia.” You should go check it out.

And get ready to hit the ground running in 2016, because it could be an amazing year for finally building safer and more complete bike routes all over town. But as Howell told me, “We gotta organize more than ever.”

This entry was posted in news and tagged brock howell, cascade bicycle club. Bookmark the permalink.